If you’re sending a submission, include all details that apply: individuals’ names, details of the milestone and a contact name and phone number. If you have photos, send them. The submission deadline for the April issue is Thursday, March 15. For best results, e-mail editor@midcountymemo.com or mail submissions to 3510 N.E. 134th Ave., Portland, OR 97230. Call 503-287-8904. 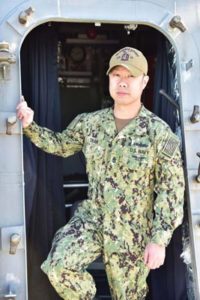 DDHS grad excels in Navy career
Chief Petty Officer Lee Tran, a 1999 David Douglas High School graduate, is serving in the U.S. Navy as part of a crew working aboard one of the country’s most versatile combat ships.

Designed to defeat threats such as mines, quiet diesel submarines and fast surface craft, littoral combat ships (LCS) are a bold departure from traditional Navy shipbuilding programs. The LCS sustainment strategy was developed to consider the unique design and manning of LCS and its associated mission modules.

According to Navy officials, the path to becoming an LCS sailor is a long one. Following an 18-month training pipeline, sailors must qualify on a simulator that is nearly identical to the ship. This intense and realistic training pipeline allows sailors to execute their roles and responsibilities immediately upon stepping onboard.

“Every single day, our LCS surface warriors prove they are the best and the brightest—and let me tell you, they love their ships,” said Captain M. Jordan Harrison, Commander, Littoral Combat Ship Squadron One. “LCS are fast, agile [and] maneuverable, and the minimal crew manning affords leadership and qualification opportunities you won’t get anywhere else in the Navy. Visit one of our ships and you will see ensigns and chiefs at the helm because that is just how highly trained, talented and motivated our officers and sailors are in the LCS community.”

As one of 70 crewmembers for one of the Navy’s newest ships, Tran explained they are building a legacy that will last beyond their lifetimes. Crewmembers know how important it is for the Navy to develop new war-fighting capabilities to continue their success on the world’s oceans.

Through innovative planning, the design of systems and crew requirements, the LCS platform allows the fleet to increase forward presence and optimize its personnel, improving the ability of the Navy to be where it matters, when it matters.

Among Tran’s proudest accomplishments was advancing to the rank of chief petty officer. “I’m proud of what I’ve done in the Navy, and I’ve worked hard to get here,” said Tran. “But you really don’t understand your impact until you hear the way your kids talk about you.”

Scot earns Spirit of Community award
Abigail Alvarez, a senior at David Douglas High, has been named a distinguished finalist in the Prudential Spirit of Community Awards and was presented with a bronze medallion last month. She started All Peers United, a program that coordinates opportunities for students with and without disabilities to work together on service projects. Inspired to advocate for kids she mentored in her school’s special education program, Abigail applied for grants, worked with teachers and local organizations and ensured special after-school transportation to bring her idea for the club to life.

Tatafu signs letter of intent to Idaho
Standout Parkrose defensive end and outside linebacker Spencer Tatafu announced his intention to play football for the Idaho State University Bengals in Pocatello next year.

At 6’1” and 245 pounds, Tatafu was a two-time first-team all-Northwest Oregon Conference at linebacker, a MAC Scholar Athlete Award winner and honor roll student who also took second place in state for discus and shotput and was a two-time Northwest Oregon Conference Athletics discus and shotput champion. His parents are Spencer and Aviance Tatafu. He plans to major in business. 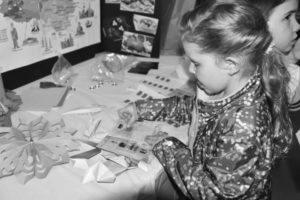 A Portland Christian Elementary student affixes a sticker to her passport as she travels the world at the school’s annual cultural night.
COURTESY GRACE DUGGER

At each table, families could taste authentic food and see artifacts, pictures and clothing. There were performances from Ireland, Vietnam, Germany, Ukraine and Hawaii, as well as student folk dancers. Students enjoyed learning interesting facts about the different countries, making a variety of cultural crafts and filling out their very own passport with stickers and buttons as they traveled the globe, one table at a time.

Festival announces princess candidates
Judging to narrow the field for the 2018 Rose Festival Court was held last month. After two rounds of speeches and questions, the final grouping was selected, and area high school students will cast a vote for the winning princesses this month.

In the first round of judging, applicants were asked to speak on their own personal history, including sharing their community service activity, and then answer questions posed by a panel of community volunteer judges. Students who successfully passed through the morning’s first round were invited back in the early afternoon to give a three-minute speech on the festival’s 2018 theme: Play Happy.

This year’s advancing group of contestants features 10 juniors and 30 seniors vying for the crown of Queen of Rosaria.

Junior and senior girls from class 4A to 6A schools in the tri-county area who have a grade point average of 3.0 or higher and 20 hours of verifiable community service are eligible. Candidates represent the 13 traditional Portland schools as well as the east metro, with students from Clackamas and east Multnomah counties and west metro students primarily representing Washington County schools.

Each member of the 2018 Rose Festival Court receives a $3,500 scholarship.

Representatives for the Rose Festival Court from mid-county schools are as follows:

20 Is plenty
The city of Portland is providing free “20 is plenty” yard signs and bumper stickers to raise awareness about Portland’s new 20-mile-per-hour residential speed limit.

Yard sign pick-up times and locations are as follows:

In an effort to increase safety, speed limits on Portland’s residential streets are dropping to 20 miles per hour following a recent Portland City Council decision. The new speed limit will take effect citywide by April 1, 2018.

The 20-mile-per-hour speed limit is part of Portland’s Vision Zero work to eliminate traffic deaths and serious injuries. A pedestrian hit by a driver at 25 miles per hour is nearly twice as likely to die compared to someone hit at 20 miles per hour.

View a map of 20-mile-per-hour residential streets and get more details on yard signs at visionzeroportland.com.