Local businesses provide employment for area residents and products and services close to home. Mid-county Memo Business Memos celebrate news, advancements, promotions, retirements, expansions and other noteworthy events at these cornerstones of our community. To share news of your business with our readers, Business Memo submissions for the April issue are due by Thursday, March 15. For best results, e-mail Darlene Vinson at editor@midcountymemo.com. You may also mail submissions to 3510 N.E. 134th Ave., Portland, OR 97230. To leave a phone message, dial 503-287-8904. 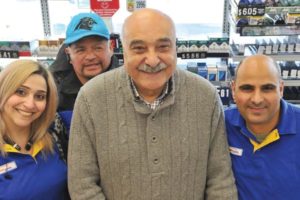 This month, Joe Amhaz, center, marks the 30th anniversary of his purchase of the am/pm minimarket and Arco gas station franchise at the corner of Northeast 122nd Avenue and Halsey Street. He poses with employees, from left, Marina Hanna, Israel Perez and Wajeh Somail.
STAFF/2018

In 1971, with $800 in his pocket—all the money he had in the world—20-year-old Lebanese student Joe Amhaz arrived in Portland to attend Portland Community College. After graduating from Portland State University (PSU) in 1976 and going overseas for eight years to work for the Qatari government, Amhaz bought his first am/pm franchise at 12140 N.E Halsey St. on March 4, 1988, which also happened to be his birthday. “I was looking for a business; I met somebody who owned an Arco, and then we met the [Arco] representative, and we look for the right time and the right space,” he said in an interview. “And then luck. I think luck played a big role, but you have to know somebody, it’s who you know and it’s your karma.” 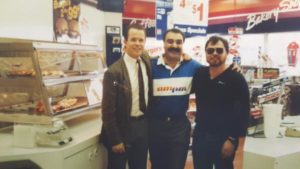 From the start, it was a family endeavor. Amhaz’s wife Lulu, who he met while at PSU, sons Sam and T.J. and daughters Elisa and Naise all helped over the years. With time, a gregarious nature and hard work, Joe grew his business, adding Arco franchises in Kelso and Longview, Wash. In 2010, he sold the Longview am/pm. “The competition is tough now,” he said referring to grocery stores opening filling stations. “You’re not alone anymore in this market.”

Amhaz thinks his success is due to a few reasons: “I believe it’s location, your service, the price and your kindness to the people,” said Amhaz “We live in a good community here. After 30 years, to stay in business you have to have support of the community here, the Parkrose area. I never had any problems anywhere.”

Sam Amhaz said they have between 500 and 1,000 customers in any one 24-hour period at the Halsey store. He said if you have the right people, operating a business that never closes can be made easier. “You take care of your people and they take care of you,” he said. He points to 30-year graveyard shift manager Doug Shrum as an example. “He’s been a fixture here. Everybody knows Doug. The police, people who work at night; that’s helps a lot.”

Joe has lived in Parkrose’s Argay Terrace neighborhood for more than 30 years. All four Amhaz children matriculated through Parkrose schools. He and his family will thank loyal customers and the community throughout the month with free products, raffles for gas cards and other prizes. Joe will be on hand daily from noon to 3 p.m. to greet well-wishers. 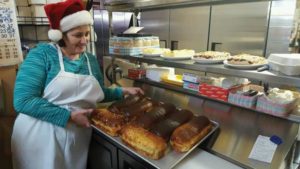 Cozonac, a Romanian specialty, is but one of many delicacies served by Old Country Sausage in Parkrose, whose days may be numbered.
COURTESY OLD COUNTRY SAUSAGE

Old Country Sausage future looks hazy
Located at the same place for nearly 50 years, Old Country Sausage, 10634 N.E. Sandy Blvd., is as recognizable and classic an east Portland eatery as they come. But by the end of March it could be no more, much to the disappointment of local regulars and lovers of European import foods and old-style meats.

Originally started by Franz Zoeller, an immigrant from Germany with a love borne from family tradition of making sausages, deserts and other European treats, Old Country is both a deli and a restaurant. Their website, which is no longer active, lists the owners as Beni and Lidia, but the Secretary of State database lists the owners as Constantin and Maria Berar.

“[It was] one of our favorite places on Sandy Boulevard,” said local resident and regular Nancy MacGregor, noting the sad closing was “another sign of the times. The German bakery already closed a year or so ago.”

While Old Country Sausage is scheduled to remain open through March, there may be a ray of hope for enthusiasts of German sausages and Romanian deserts like cozonac, a sweet bread enjoyed throughout the Balkans. The Mid-county Memo was told there is a buyer currently closing on a loan, and if it goes through, they’ll be taking over Old Country Sausage and hopefully continuing the tradition there. The owners declined to comment for this piece and remain tight-lipped about the future.

“We’ve been eating and shopping there many years,” said MacGregor, “and [we] always pick-up the latest edition of the Mid-county Memo there.”