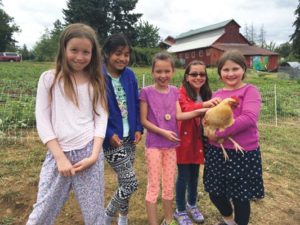 Healthy food relies on healthy soil, while a healthy educational program depends on some serious dough. Zenger Farm (11741 S.E. Foster Road) has long provided David Douglas School District fifth-graders with seasonal class visits, encouraging science-focused lessons on its various premises. With a new Oregon Department of Education (ODE) Farm to School grant providing $27,914, this staple batch of field trips are in no immediate danger of ending up on the chopping block.

“Every fifth-grader in the David Douglas District travels to Zenger Farm three times a year [seasonally] to learn about the science of farming, gardening and local food production,” says Dan McCue, communications director for the David Douglas School District.

The grant is one of 22 that are being implemented statewide for food-based, agriculture-based and garden-based education activities. Altogether, around a million dollars––$982,000––are being awarded to ensure that kids continue to get their hands dirty. The grants will allow for more than 116,000 hours of farm to school educational programming.

None of this would be possible if the Oregon State Legislature hadn’t passed House Bill 2038 unanimously in 2017. House Bill 2038, the Farm to School and School Garden Bill, is a continuation of previous grants passed by state politicians.

Zenger Farm serves many local purposes. According to its homepage, it was purchased from the Zenger family by the City of Portland’s Bureau of Environmental Services in 1994. By June 1995, the land had become a functioning farm again with community on the mind.

The farm harbors four acres of land for food production, in addition to the Zenger Farm Egg Cooperative, which raises its own livestock. In 2015, it opened the Urban Grange, a 6,600-square-foot facility with classroom, office and meeting spaces designed for the next generation of farmers, consumers and food entrepreneurs. The Grange also includes a commercial kitchen, which can be utilized by startup food businesses as well as for more generalized community events.

But for David Douglas’s 28 fifth-grade classes, all 831 students can look forward to tending to vegetables and farm animals, as well as the farm’s coveted 10-acre wetlands.