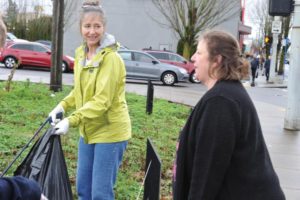 Sue Grimsrud got sick and tired of seeing the traffic jug handle at Northeast 102nd Avenue and Weidler Street festooned with litter while driving by it. Rather than waiting indefinitely for the city or a neighborhood association to do something about it, she put out a call for help to clean it up on Nextdoor, a private social networking service. About a dozen people—including Sue’s husband and their two teenagers—showed up on a rainy Saturday last month. “I’ve lived here 15 years, and I hated seeing the cornerstone to Parkrose look so ugly,” she said. “I knew if we got a few people together it wouldn’t take long [to clean it up].” She was right; it only took them about an hour to clean out the litter. 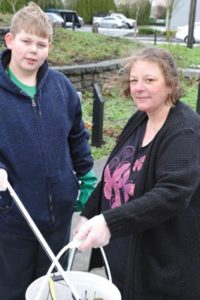 Tired of watching the conditions get worse at the traffic rounder formerly known as Windscape and sick of waiting for the city to clean it up, Sue Grimsrud called for help on social media and got a work party together, which included her son, Gunnar.
STAFF/2018 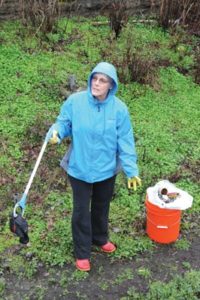 Ginger Wright, who lives in the Russell neighborhood east of 122nd Avenue, also volunteered to help clean up the traffic roundabout.
STAFF/2018

Rita Amdal, who lives on Northeast 102nd Avenue across the street from the traffic roundabout, said, “I saw [Grimsrud’s post] on Nextdoor, so I thought I’d come over and help.” Ginger Wright, who lives in Russell, east of Northeast 122nd Avenue, also saw the notice. “It’s a shame what the homeless did to this place. I’ve got most of it [the refuse in the area where they camped], but I’m not picking that up,” she said pointing to a pile of broken glass and human waste.

If you want to report a problem with any publicly maintained city infrastructure, go to pdxreporter.org and download the application to alert the city of issues like this.

Windscape—as it was known from 2008 to 2014—is set for more love. Prosper Portland has allocated money to rework the traffic rounder. Please see “Updates to Windscape” on page 10.