Construction in couplet commences in 2018 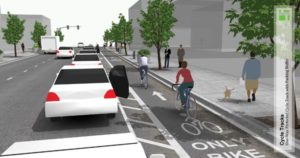 Construction on various projects in the Halsey-Weidler couplet, including the protected bike lanes, commences in January.

The Halsey/Weidler couplet is a stretch that runs on Northeast Halsey and Weidler streets from 102nd to 112th avenues. For years, even decades, it’s been at the center of several feverish conversations over progressive urban planning and road improvements. In early 2018, the couplet will finally see a number of these tasks hit the ground running. “2018 will be the year for Halsey/Weidler, but there will be a facelift,” says Tom Badrick of the Parkrose Heights Association of Neighbors, who has collaborated with Friends of Gateway Green (Linda Robinson and Arlene Kimura). “They will be small on the city’s scale but big on ours.”

As previously reported (“Bike lanes cause rift between city and Gateway businesses,” MCM August 2017), the plans call for protected bike lanes implemented by the Portland Bureau of Transportation (PBOT). The protected bike lanes have been a tumultuous topic for certain business owners in the area, who claim that they might deflect most shoppers who travel by car.

Brad Fouts, whose sports bar is on Northeast Halsey Street at 103rd Avenue is one of these business owners. “As for the bike lane, there already is one. The issue is bicyclists don’t use it. They use the sidewalk,” he said in an email. He is partially correct. Oregon law requires bicyclists to use a bike lane if provided. If there is no bicycle lane then cyclists can use city sidewalks; however, the behavior Fouts cites is ticketable under ORS 814.410, which provides that a person commits the offense of “unsafe operation of a bicycle on a sidewalk” if the person:

Fouts says since bicyclists are never ticketed, they have no reason to use it. “This is a violation that they could be written a ticket for, which never happens. So, let’s build another [bicycle] lane, move cars closer to fast moving traffic and increase the odds drivers will be hit while getting out of their cars. Just another great idea by the city.” He added, “The other day I almost got hit by a bicyclist when exiting my business, when I asked her to use bike lane, she swore at me.”

Halsey Street itself will be repaved with curb extensions. Street lighting will be upgraded and will preside over pedestrian walk areas as well as autos on the road. “It’s like Northwest 23rd and the Hollywood District,” adds Badrick, who also worked on Southeast Hawthorne streetscape improvements a couple of decades ago. “We’re trying to stand out, and having a standard fixture wasn’t of interest anymore. If you have more people walking, you’ll have a better business environment.”

Construction on various projects, including the protected bike lanes, commences in January. The detailed timetable for the bike lanes is uncertain, but other projects (such as the lighting fixtures) should wrap up in six to eight months.