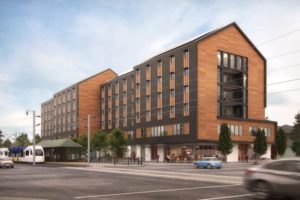 Concept art of what the Blackburn Building—on the Northwest corner of East Burnside Street and Northeast 122nd Avenue—will look like when it is completed in 2018.
Courtesy of Central City Concern

The final building in the three-pronged Housing is Health initiative has broken ground, with a ceremony being held on Monday, Nov. 6. The Blackburn Building, as it will be called, got its name from recently retired Central City Concern (CCC) President Ed Blackburn and will serve as both a housing and treatment center. Formerly known as the Eastside Health Center, the Blackburn Building is the most ambitious layer in the initiative combining residential housing with on-site health services. As previously reported here, Housing is Health is a plan by the nonprofit CCC to create 380 units of housing for people who don’t have permanent housing or are at risk of becoming homeless. They’ve already broken ground on the first two buildings in their planned trifecta, with Stark Street Apartments just beginning construction in September and Charlotte B. Rutherford Place starting construction in August.

Among the many stakeholders who spoke at the groundbreaking were the current CEO and president of CCC, Dr. Rachel Solatoroff. “The Housing is Health collaboration is an excellent example of health systems recognizing the impact housing has on an individual’s health,” said Dr. Solatoroff. “They’ve united for improving health outcomes as well as the common good of our community.” The concept of placing a high priority on finding homes for people in already vulnerable health states—and keeping them in those homes—is at the core of the initiative and was spoken about by many people at the event.

Located at 25 N.E. 122nd Ave., the Blackburn Building will include 176 units of housing (52 of respite care, including 10 palliative care units, 90 units of transitional housing and 34 permanent homes) in addition to a medical center providing recovery and mental health services that will reach over 3,000 community members per year. The idea is to have on-hand, nearby and available medical and social professionals to keep patients housed. If they’re off the streets, they stand a much better chance of staying clean, healthy and alive.

Each of the three buildings in the plan sets its sights on different groups in need. Stark Street Apartments is for working individuals and families, and the Charlotte B. Rutherford Place is for displaced residents, providing a home for those who have been pushed out of being able to afford a place to live by a variety of factors.

Each year, CCC helps more than 14,000 people with housing, healthcare and/or employment services, with 3,300 of them receiving treatment for substance use disorders. Over 3,500 people are given places to sleep each year, and that number stands to grow significantly with the completion of these three buildings.

Representatives from all six of the major stakeholders spoke, in addition to several others. But the most memorable speaker of the afternoon was local community member Mike Holevas. Currently a CCC client himself, Holevas is still in recovery and spoke of his own experiences, even telling of buying drugs right where the Blackburn Building will stand some day soon.

“This corner now can be the site where thousands who are suffering—and believe me, we suffer—can come for transformation [and] healing; families will be restored,” said Holevas. “I’m so proud to be part of something that will bring hope and healing to thousands of people like me.”

On 12/21, this article was corrected as to whom  the Stark Street Apartments would rent to.