Each day, members of our community quietly celebrate milestones, achievements and accomplishments—big and small. This department highlights these triumphs for the community.

If you’re sending a submission, include all details that apply: individuals’ names, details of the milestone and a contact name and phone number. If you have photos, send them. The submission deadline for December issue is Wednesday, Nov. 16. For best results, e-mail editor@midcountymemo.com or mail submissions to 3510 N.E. 134th Ave., Portland, OR 97230. Call 503-287-8904.

Civic Scholars from area schools
Each Oregon state legislator has chosen teachers as 2017–2018 Civic Scholars in their district. The program is part of a statewide initiative to enhance high quality professional development in civic education for teachers. Civic Scholar teachers receive free registration for the Civics Conference for Teachers at the State Capitol in December. The conference will feature workshop presenters from each branch of Oregon government, as well as strategies from master teachers. Civic Scholar teachers also receive special recognition at the conference, substitute teacher pay and follow-up classroom assistance. 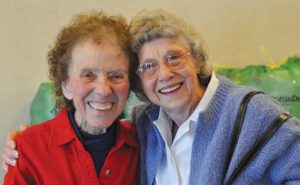 Hymn dedicated to organist
Sixty-eight years in any job is quite an accomplishment. Elaine Schaaf served as the organist and children’s choir director at Savage Memorial Presbyterian Church, 1740 S.E. 139th Ave., from 1947 until her death in 2015. An anthem dedicated to the memory of Schaaf was performed at the church last month. Written by John Carter (music) and Mary Kay Beall (lyrics) of Columbus, Ohio, the anthem celebrates “the musical talents and dedication of Elaine Schaaf, who served this congregation in countless ways for 68 years,” according to the Rev. Chris Grewe.

Savage Memorial Presbyterian Church has been part of the Hazelwood community for more than 70 years. 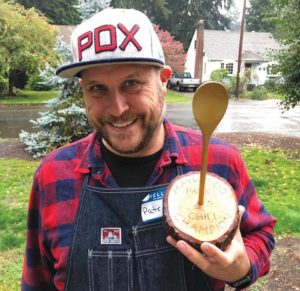 Maywood Park Chili Cook-off results
October 21 at the Maywood Commons, members of the community gathered for the second Maywood Park Chili Cook-off. The two categories in the competition were chili and cornbread. Variety was indeed the spice of the contest, with a wide variety of chilis used. Some stuck to mild fare, while others included such varieties as jalapenos, habaneros and, in the chili of one daring entrant, ghost peppers.

The cornbread was likewise all over the map, from some lovely traditional fare to jellies and other toppings to set off the flavors.

Winners were Patrick Weldon for his Maywood Pork Chile Chili, one of the spicier offerings, and Jennifer D’Annunzio for her Blueberry Cornbread with Ginger Honey Butter.

Tasting was free, but voting required a $1.00 fee for a tiny cup with two beans: one for chili, one for corn bread.

Coordinator Katy Moyes was pleased by the turnout, despite heavy rain. Attending children had to be prevented from eating up most of the cornbread, and they were delighted to get themselves and their parents wet as often as possible.

Moyes thanked all the volunteers, without whom, she said, the event couldn’t have happened. These included: Michelle and Nathan Montrose, Mayor Mark Hardie, Patrick Murphy, Angie and Steve Merwin, John Donahue, Lory Bell and Jim Akers. After the cook-off, all the enthusiastic sampling probably meant that many folks who attended didn’t need lunch.

Moyes sent out a “huge thank you for all who braved the lovely weather to join us today.” She added, “See you at next year’s (hopefully drier) event.”

A total of $75 was raised and will be donated to the scholarship program at Parkrose High School in memory of Mary Hardie.

Pat MacAodha contributed to this report