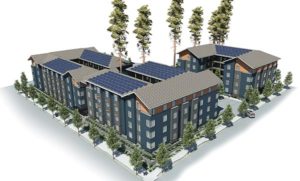 In September, Central City Concern broke ground on their newest development and hosted a walkthrough for stakeholders. The future site of 153 apartments at Southeast Stark Street and 122nd Avenue hosted representatives from Adventist Health Portland, OHSU, Kaiser Permanente Northwest, Providence Health and Care Services Portland and CareOregon. The development is aimed at singles and small families who are “exiting transitional housing programs [and] have gained employment and seek a permanent home, but [who] still may have barriers to housing,” according to a Central City Concern press release.

Stark Street Apartments, as the group of units will be called, is the second prong of the Housing is Health project. Launched in autumn 2016 (“Rehab, homeless housing hits Hazelwood” MCM December 2016) as a joint initiative of six Portland-area health organizations, Housing is Health plans to add a total of 380 units of housing and a health center for the underserved areas of north and east Portland through the building of three developments. In addition to the five organizations that were represented in person at the walkthrough is Legacy Health. However, those six healthcare providers were not the only financial supporters. The Portland Housing Bureau, Umpqua Bank, US Bank Community Development Corporation, Federal Home Loan Bank and Portland General Electric provided additional funding for Housing is Health.

Each development in the project targets a different group, as the goal is to provide help for a diverse group of underserved populations at different stages of recovery. The Eastside Health Center, located at the corner of Northeast 125th Avenue and Burnside Street, is already underway and includes some 176 units of housing in addition to a medical services center. This location is meant for people who are still in fragile medical state and/or still in rehabilitation. The Charlotte B. Rutherford Place development, which adds a further 51 units to the project, joins the two developments and broke ground in August. The Interstate Apartments, as they’re also known, are also meant to lure back displaced residents and thus fight—or at least delay—gentrification. Its units are larger and designed for families. With the September start of the Stark Street apartments, all three phases of the project are underway, and all three phases are set to open in 2018.

“These homes are important for supporting employed people with affordable housing,” said Ed Blackburn, CEO/president of Central City Concern, as quoted in a press release. “The health care organizations in the Housing is Health coalition understand that housing for lower-income working people is critical to good health outcomes and a healthy community.”