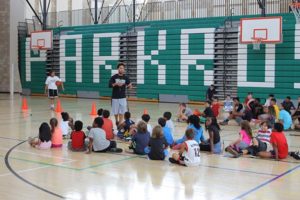 Elevate Oregon is one of the many nonprofits operating in the education space to aid elementary and secondary schools in improving outcomes such as graduation rate. Times have changed a lot since the 1960s, when public schools had virtually no presence of nonprofit organizations other than churches. Nowadays, it’s commonly seen as gospel that urban and lower-income education districts need extra help to serve their communities and keep kids in schools, which in turn keeps them off the streets. Elevate Oregon is part of a growing trend of nonprofits that partner with schools and offer classes or programs right in the middle of the school day, as opposed to more recreationally focused strategies after school.

The overwhelming growth of nonprofits as a market force in education changes since the 1970s could be its own field of study. Before then, the concept largely didn’t exist beyond the traditional sense of churches and other religious groups. But since then, the idea of a business based on a social mission with a goal of societal change rather than profit has taken hold. The benefits are not always clear, and there may even be some drawbacks as well. But in the case of Elevate Oregon, it seems a vital service is being rendered while tangibly improving outcomes.

This past August saw the successful running of their summer basketball camp program, which had more than 150 registrants and more than 120 daily attendees.

“What Elevate [Oregon] does is [mentor] here at the high school and the middle school,” says Donell Morgan, program director of the nonprofit, which serves the Parkrose School District. He’s been in the school system for more than a year now.

“We have a high school class that’s an elective,” says Morgan of the program, and they also have classes for ninth through 12th graders with teacher-mentors who stay with the same kids throughout their high school experience. Essentially, of the students selected to participate, they go to a special class period where Elevate Oregon teacher-mentors help them in all of their other classes; monitor their grades, attendance and behavior in those classes; and ensure they make it to graduation on schedule.

“We try to work on things—social, emotional—going on in the school, the school climate,” says Morgan of the Elevate Oregon mentorships. “Those students in that class then become [the mentor’s] caseload, so he makes sure they’re all going to class on time, he may advocate for them if they’re having any behavior issues …”

Marty Williams is one of the teacher-mentors, and he was also at the Elevate Oregon basketball camp, working outdoors with the kids, among his other duties.

“I was impressed. They came out here—worked hard, didn’t complain, showed up everyday,” says Williams of his young charges as he escorted them back to the gym on the last day of the camp. He was the teacher-mentor with the 10th-grade class last year, and he will stay with the same kids as they move on to 11th grade.

“We find that having a mentor for a kid enables the graduation rate to go up. Last year, Elevate Oregon graduated our entire senior class, 100 percent graduation rate,” says Morgan proudly, adding, “Same goes over at the middle school. We have two mentors over there.”

“We also do some job shadowing,” says Morgan of the programs Elevate Oregon offers other than the basketball camp over the summer. “We also do Little Lift, which takes our students who are in those high school classes—Marty and a couple of those other mentors will teach the kids and then take [them] over to Sacramento, Russell, Shaver and Prescott [Parkrose School District’s elementary schools], and those students will work with the younger kids in a sort of peer-to-peer mentoring program,” says Morgan.

“We’re the number one school district in Oregon, with regard to percentage of African American students, and also the seventh most diverse school district in Oregon,” says Gray of the demographics of the district that attracted the attention of nonprofits. Elevate Oregon grew out of Colorado Uplift (CU), a church-based organization founded by Dr. Kent Hutcheson in 1982. Hutcheson also serves on the board of directors for Elevate Oregon. CU has been serving the Denver public school system in many of the same ways that Elevate Oregon does; however, Elevate Oregon broke off due to the strict requirements in Parkrose on non-affiliation with religious groups.

“It works different with every nonprofit we have, and we work with about 20 of them. Some are grant-funded, some are match funded … with Elevate [Oregon], we don’t pay a dollar, and we never have,” says Gray. “The only thing we provide them is a space at the high school and access to the internet.”

“We’re broke. We could not survive without the generosity and partnership of our nonprofits,” says Gray. “We could never afford to take money from the general fund—or rarely—to fund the nonprofits we work with.”

The installation of Morgan as the coach of the Parkrose high school boys basketball team, which will have several players in the Elevate Oregon elective program, could prove to be a prescient move that portends many to come at other nearby schools. There are other nonprofits at work in school districts nearby, such as Schools Uniting Neighborhoods (SUN) in David Douglas and many others. Mid-county Memo will continue to examine their role in the public-school system in future articles.

“We had about 600 kids last year in the program. This year we’ve served upwards of 800 kids,” says Morgan of the program’s rapid growth. With a relatively small staff, Elevate Oregon has become a major part of how Parkrose educates its kids. This summer day in August at the end of their basketball camp, they also seemingly found a way to reach them beyond their classes and communicate with them on a level they seemed to respond to.

“Our biggest goal is to be a staple, to be a pillar in the Parkrose school district—not only for the education aspect, but for the mentoring,” says Morgan. “As a member of the equity team here in Parkrose, I work closely with both principals—at the high school and the middle school—to really create a positive vibe in this community and make the kids dream big.”

The results are hard to argue with. “The data we’ve looked at, with graduation rates and reduction in discipline and exclusionary rates—the [Elevate Oregon] class is more than just keeping the class on track in study skills,” says Fischer Gray, continuing: “They directly teach 14 positive character skills, with a very specific curriculum to enhance the lives and the life skills of our kids.” Gray also highlighted the fact that the Elevate Oregon mentors are with the kids in the middle school as well, starting the leadership role in their lives even before high school. “Our kids are getting the kind of strong leadership and mentorship that research proves beyond a shadow of a doubt is very good for kids,” says Gray.

The end of the camp saw the children celebrating each other’s victories and thanking their coaches profusely. Morgan and the other camp counselors took time to bring up several children’s parents to thank them for bringing snacks and other things they did to help the camp be a success.

Omar Leary, another teacher-mentor who was working at the camp, kept the kids on track and guided them in a speech at the end of the day.

Leary gave sage advice to the children to take the momentum of the things they learned and the progress they made at the camp back to the rest of their lives as well. “For one week we were a family,” he said to the rapt audience in the gym; “For one week, we were a team.”

Elevate Oregon
Elevate Oregon was launched in 2010 by Ashley Campion of the Helen K. and Arthur E. Johnson Foundation, based on Colorado Uplift, which was founded in 1982 by Dr. Kent Hutcheson. Elevate has a staff of 10 and had donations of $720,000 in fiscal year 2015, the most recent year for which data is available. Parkrose is currently the only school district in which the nonprofit operates. Their mission is to “build relationships with urban youth to promote education, self-reliance and leadership.”