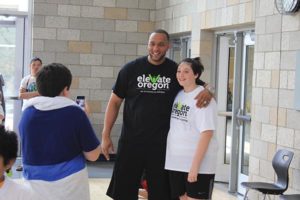 Morgan at the end of Elevate Oregon basketball camp.
Photo by Ygal Kaufman

Donell Morgan is the new boys basketball coach at Parkrose High School, with his inaugural season set to begin this fall. Though his presence on the sideline will be a fresh change, he’s not new to the Parkrose School District. Morgan is the program director for Elevate Oregon, a nonprofit education concern serving the children of Parkrose from kindergarten through high school.

Morgan has been playing basketball himself since he was seven, growing up in Tacoma, Wash., where he was All-State for his high school team (Henry Foss High School). Upon graduation, he earned a scholarship to Umpqua State Community College in Roseburg and eventually transferred to play for and study at Idaho State University in NCAA Division 1. After that, he played five seasons of professional basketball abroad in Chili, Honduras, Paraguay, New Zealand, Malta, Iceland and other places. “I really wanted to get into coaching for the mentorship,” says Morgan of the transition from player to coach. “I went back to Umpqua to be an assistant and learn under my former head coach, Rod Snook.” When Snook retired just a few years later, Morgan became a head coach of a college program while still just in his twenties. After seven seasons as head coach, he returned to his hometown of Tacoma to become program director of the Boys and Girls Club of Puget Sound.

Meanwhile, in Parkrose, the basketball team had been experiencing a marked uptick in expectations. Coach JC Alexander had the team playing better than it had in decades. Under Alexander’s tenure, the team reached the State tournament in 2016 and 2017, after having not done so since 1991. But suddenly the future was thrown very much into question when Alexander accepted a head coaching position in Vancouver.

“JC is a good guy, and he took the team to new heights. The last couple years they had some great talent here, and he really maximized it,” says Morgan, “I actually worked quite closely with him through Elevate, helping kids with classes, monitoring grades, so me taking over was something I approached with a little bit of caution.” Morgan had left his last coaching position in 2009 because he says he was looking for something different career-wise. He ended up with Elevate and found himself with an opportunity to combine his past experience with his new pursuits.

Parkrose Athletic Director Daunte Gouge also spoke highly of Alexander while expressing unbridled optimism for the future under Coach Morgan. “He was given a dream situation. His alma mater offered him a position at their school as their head coach,” says Gouge of Alexander. “It was a win-win for him. In the grand scheme of things, it was a huge win for us with Donell, though. His basketball coaching experience is one thing, but with his position with Elevate, he’s in all of our schools. I am so excited about the things Donell is going to be able to build in a K–12 program.”

This presence in the entire school system is one of the most attractive aspects of the hire for Gouge. Unlike in the past, when virtually all coaches at the high school level were also teachers in the school, nowadays it’s much harder to find a talented and experienced coach who knows how to win—and also knows how to educate young people.

“It’s not like it was, where most of the coaches were in building,” says Gouge of the lack of coaches who are also teachers, “but we’re trying to move back to that way, like with our football program, [which now has] five of the main seven coaches being in building. It’s a changing trend in high school sports.”

While Morgan is not a teacher per se, he’s arguably even more ingrained in the students lives through Elevate than a person teaching a single course might be. “Elevate was already at Parkrose when I came, and Donell is the head guy at Elevate for Parkrose,” says Gouge, who was hired two years ago. “I had met him previously, and he was one of the first people to apply for the position. Then looking at his credentials I was very excited to get the chance to interview him.”

Without taking anything away from his coaching, part of the reason for Alexander’s success could also be undoubtedly ascribed to some of the excellent players on his roster. With the graduation of key senior players like Wilfred Likayi and Isaac Bonton this past summer, there is certainly cause for trepidation that the team might find it hard to continue the past two seasons’ successes.

“Though we’ve lost a lot of great talent, this is an opportunity for young men to step up and build their own brand under a new system,” says Morgan of his coaching style and the challenges he’ll face. “It will be basketball-friendly for some guys, but different for others, but I really think we have an opportunity to do something special. It’ll take time, and there will be growing pains at the beginning.”

Unlike college and the pros, there’s far less, if any, recruiting going on in high school sports, particularly in public schools. “You have to be ready to maximize your personnel. If you’re going to be a running team, or a team that pressures the ball, you have to condition the team physically,” says Morgan about the regimen he intends to install. “Physically we have to get ourselves prepared; mentally we have to get ourselves prepared for a new system.”

Morgan’s coaching strategy is built around having roots in the community that run deeper than the locker room. “You want everyone in the district to be part of the program, you want a fun atmosphere, you want a community atmosphere,” says Morgan about what he’s trying to build and the potential he sees in Parkrose. “It’s almost like being back in Roseburg again.”

Morgan reflects with confidence on the head coaching opportunity coming his way. “I thought, ‘Wow, it’s really a perfect calling right now.’ I’m in the building, I’m mentoring kids, and now it’s an addition to what I really want to do, which is getting young men and women to get on their way to doing something positive and contributing back to [their] community.”