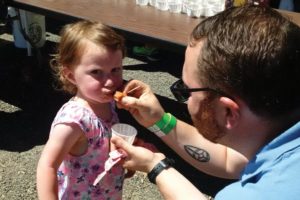 Max Gummer and his daughter Wren, 2, enjoyed the fourth annual Taste of Parkrose; especially the taste part. “Her mom’s a vegetarian,” dad Max said. “So, this is a special treat for her.” More than 3,000 people attended this year’s event which moved from the business district on Sandy Boulevard to Rossi Farms.
STAFF/2017

Despite record-breaking temperatures, more than 3,000 people—also a record-breaking number—attended the fourth-annual Taste of Parkrose on Saturday, June 24, according to event producers. Relocating the event from the Northeast Sandy Boulevard business district to the familiar confines of Rossi Farms accounted for some of the increased attendance. An effective marketing campaign, which drew hundreds of people new to the event, accounted for the rest.

Presented as a family-friendly celebration of the Parkrose community, the annual event, features live music, local vendors, a beer garden, kids’ activities, a 5K and 10K Fun Run and a cooking competition. “We were thrilled with the number of attendees,” said Historic Parkrose (HP) Chair Samantha Montanaro. “The food was off-the-charts delicious, the vendors offered really cool stuff and the bands were rockin’!”

HP staff created the Taste in 2014 to bring potential new customers to the Parkrose business district from Northeast 99th to 122nd avenues along Northeast Sandy Boulevard. After two years on Northeast 106th Avenue between Sandy Boulevard and Wygant Street, the Taste moved across the street to the yet-unopened Grocery Outlet and Dollar Store parking lots next to Parkrose Hardware. With the stores’ opening, the Taste needed a new site, as going back to Northeast 106th Avenue was impossible because of neighbors’ concerns over street closures. Organizers then looked just outside the business district to nearby Rossi Farms, a site made for events like this. “The decision to move the Taste of Parkrose to Rossi Farms was multi-faced,” Montanaro said. “Our desire to grow the event, to be able to provide locals with a fun, family-friendly festival was in the forefront of decision making. The focus area of Historic Parkrose is impossible to close. The side streets were difficult to navigate for the set up and vibe of the large-scale Taste event we were aiming for. We felt that Rossi Farms represented the family-friendly atmosphere we were aiming for.” 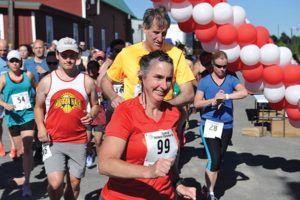 The 5K and 10K Fun Run, part of the Taste of Parkrose, got the annual community event underway on Saturday, June 24, a record-setting hot day. This year’s course took runners on a tour of Parkrose. The 10K route took runners through Maywood Park and into Gateway Green on the new park’s official opening day.
STAFF/2017

The Fun Run was added to the event in 2015. Last year, organizers added an EGGFest cooking competition, which provided treats for Tasters cooked on 35 Big Green Egg ceramic grills provided by Parkrose Hardware. The winner got a $500 Parkrose Hardware shopping spree. Big Green Eggs were for sale at reduced prices during the event.

Despite record attendance, Parkrose Hardware manager Dan West said EGG sales were down this year—35 versus 40 in 2016. Referring to the temperature in the cooking area, West said in an email, “It was HOT!”

The 5K and 10K fun run got the Taste underway in the morning. Starting and ending at Rossi Farms, this year’s course took runners on a tour of Parkrose. The 10K route took runners through Maywood Park and into Gateway Green on the new park’s official opening day.

Avid runners Steve and Barbara Beard, who live in Florida but were in town visiting Steve’s dad, said they found the run on social media. Steve, who grew up in the area and graduated from Parkrose High School in 1973, said jokingly that he returns every few years to “check on my dad, or my inheritance,” and that he was tickled to run around his former neighborhood. “I love Parkrose,” he said. “It’s pretty hot today, but nothing like the humidity in Florida.”

Daniel Wallace, another Parkrose High grad (1979) who participated in the 10K Fun Run said, “Tell Mr. Rossi thank you and what a great event this is.”

Like the attendance numbers, participation in this year’s run also doubled to 148, nearly three times the 50 runners the first year of the Fun Run.

“Community is everything and east Portland has one of the most diverse and beautiful communities in the city of Portland,” Montanaro said. “We are already planning next year’s event at Rossi Farms and are looking forward to making each year better and better.”

To see a drone video of the event, go to: youtu.be/jrlqZ226Y7Y

What is Historic Parkrose?
Historic Parkrose is one of eight Prosper Portland (formerly the Portland Development Commission) Neighborhood Prosperity Initiative (NPI) areas that are sprinkled throughout the city. Business districts chosen for the city’s extra attention are “experiencing lagging commercial investments, with a higher than city-wide poverty rate, and a higher concentration of minority-owned or neighborhood-serving businesses,” according to Prosper Portland’s website.

Separate from local business associations, Prosper Portland staffs and funds each NPI group through tax-increment financing garnered from the property taxes in geographic specific areas. Essentially, they’re mini-urban renewal areas, but with local volunteers given control of where and how the money is spent.

Want to be a Historic Parkrose volunteer? Visit historicparkrose.com for more information, or call 503-964-7807.

What’s a Big Green Egg?
What’s an EGGFest?
A Big Green Egg, or EGG, is the brand name of a kamado-style ceramic charcoal barbecue cooker, according to Wikipedia. An EGGFest is a gathering of Big Green Egg owners, or Eggheads, fans and chefs. Cooks showcase their skills using the EGGS to prepare their specialty recipes. Tasters stroll through the cooking area, sample the “Egged” food while talking to the cooks about their recipes and techniques. Tasters then vote for their favorite.