Local businesses provide employment for area residents and products and services close to home. Mid-county Memo Business Memos celebrate news, advancements, promotions, retirements, expansions and other noteworthy events at these cornerstones of our community. To share news of your business with our readers, Business Memo submissions for the July issue are due by Thursday, June 15. For best results, e-mail Darlene Vinson at editor@midcountymemo.com. You may also mail submissions to 3510 N.E. 134th Ave., Portland, OR 97230. To leave a phone message, dial 503-287-8904. The Mid-county Memo fax number is 503-249-7672. 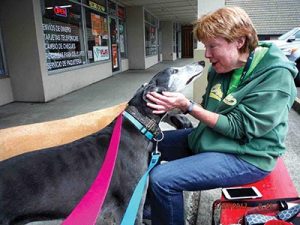 Last month, at the “Adopt A Greyhound” event held at U Can Do It Dog Wash & Grooming, Diane Watkins says hello to the greyhound she helped take care of that was adopted by U Can Do It’s Dee Dekking at last year’s event. Two greyhounds are still looking for a good home.
COURTESY SUE WADE

Bathe your dog or let the pros do it
U Can Do It Dog Wash & Grooming, 11931 N.E. Halsey St., has welcomed Katy O’Donnell to its grooming staff. She trained at Betty’s Grooming School in Hillsboro, has 13 years of grooming experience and worked at Urban Fauna before joining owner Sue Wade’s team at U Can Do It in December.

Groomer Amy Abshire has returned to the shop after giving birth to a baby boy on April 10. Happy clients are filling her grooming schedule quickly.

Dee Dekking continues to run the front desk part-time while using knowledge and skills learned from her special-needs dogs to care for the pets of others.

As part of her commitment to the animal kingdom, Wade held an “Adopt a Greyhound” event last month. Dekking brought her two greyhounds that she adopted last year. They were very happy to greet Diane Watkins, who used to help take care of them. However, two greyhounds are still looking for a good home. “We had a successful Adopt a Greyhound event as far as donations go,” Wade said in an email. “We raised more than $300 in cash donations for them. Plus, they could sell T-shirts and beautiful collars.”

The shop will sometimes close early if weather is bad or traffic is slow, so please call ahead at 503-477-7868. 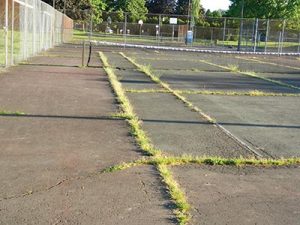 Worn-out tennis courts at Argay Park will be refurbished this summer.
STAFF/2017

Work at Argay Park set to begin
Construction to restore the existing tennis courts at Argay Park, the only Portland Parks & Recreation (PP&R) tennis courts located east of I-205, is scheduled to begin this month. The park is at Northeast 141st Avenue and Failing Street. Funding comes from the 2014 Parks Replacement Bond.

Work will include resurfacing the courts; repairing the pathway from Northeast 141st Avenue to the courts to correct Americans with Disabilities Act deficiencies; installing new benches and a water fountain; improving tennis court lighting; and replacing fencing, nets and stanchions.

Four holly trees will be kept to preserve the history of the site and neighborhood, and 14 new shade trees will be planted. Some of the invasive holly trees near the courts will be removed to provide better sight lines from the street. Tree removal will occur after Aug. 1 to avoid bird nesting season. Other areas of the park will not be impacted by construction.

The work is expected to be completed in October with a reopening of the courts slated for this fall.

If you have questions, contact Maija Spender, PP&R’s public involvement coordinator, at maija.spencer@portlandoregon.gov or 503-823-5593. 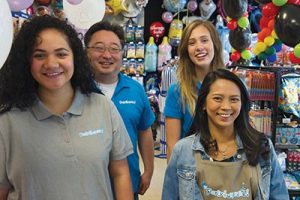 Party Surprise! is Party City with backstory
When you think of places that sell confetti and faux medals for elementary school spelling bees, you probably think of Party City. But in Parkrose, that’s not your only option anymore.

Party Surprise!, a party supply store that offers everything from abstract balloons to seasonal birthday cake decorations, is the brainchild of two people who believe in a fresh start. And for a rogue store that includes most of the quintessential materials you would expect from a larger chain, Party Surprise! involves a bit more personality.

Ironically, its owners—Hiroshi and Love Umeda—are recent arrivals from Japan and the Philippines, respectively. The couple stem from a culture largely unfamiliar with the products they market.

“It’s very hard to find those products in Japan,” explains Hiroshi Umeda. “The reason why we wanted to come over here was our kids.”

Though the couple has resettled in Portland, Hiroshi still frequently travels back to Japan, where he works as an engineer. In his stead, Love runs the business; she is a former middle-school English teacher from Japan. The couple has two children—Asami, who is seven years old and another, Kouta, who is three—who Hiroshi and Love hope to raise in the United States.

Yet as it turns out, the Pacific Northwest is hardly foreign to the Umedas.

“Twenty-five years ago, I was in Seattle as a college student,” says Hiroshi. “It’s my second hometown; I grew up there. I wanted to stay there for longer, but I had to go back because of the visa.”

For now, Party Surprise! offers the couple a link between their old life and the one they are hoping to build in Portland. It also offers patrons a bit of background behind what they would otherwise pin to a wall, take for granted and forget over a couple shots of Jäger.