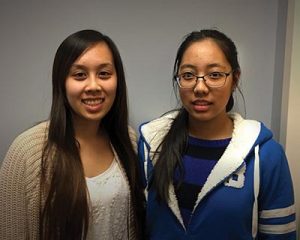 Parkrose High seniors Karen To and Maria Than are winners of Lawrence University’s College Possible Scholars awards. This award meets 100 percent of demonstrated need except for one federally subsidized loan. Lawrence University is a liberal arts college in Appleton, Wisc.
COURTESY PARKROSE HIGH

Mid-county student athletes excel in the classroom. The Oregon Schools Activities Association’s (OSAA) Academic All-Star program recognizes teams with a combined GPA of 3.0 or better. The boys and girls team in each OSAA‑sanctioned activity with the highest team grade point average earns the Academic All-State Award.

The David Douglas girls swim team had the highest team GPA among mid-county schools, posting a 3.77 combined GPA and placing sixth among 6A teams in the state.

Madison wrestlers landed in the top ten teams in the state with a 3.17 GPA.

These teams all had combined GPAs of 3.0 or better: 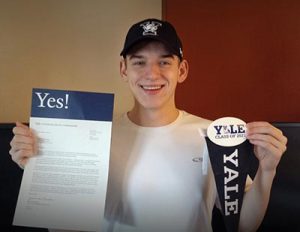 Students and teachers are working hard at Ron Russell Middle School in the David Douglas District. Forty-two students improved their GPA by 0.5 points from the first quarter to the second. These 42 hardworking students are the first recipients of Ron Russell Timberwolf SWAG (Students with Academic Growth) awards. In March, 36 students earned Student of the Month recognition for showing outstanding responsibility in their classes, and 50 students were named March Academic All-Stars for their strong commitment to their studies. The RRMS second-quarter honor roll boasts 280 names. Principal Andy Long credits his teachers and staff for “working so hard to motivate our students to learn, stretch themselves and do their best at school. I’m very proud of them.” 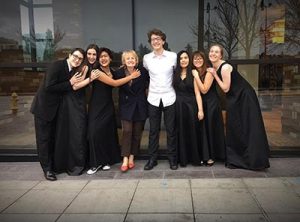 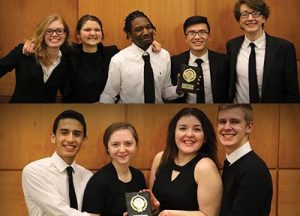 For the first time in 10 years, DDHS fielded a team at the regional Mock Trial competition held last month at the Clackamas County Courthouse. The Scots had a team thanks to the volunteer coaching of PSU grad student Joseph Cornett, who is a student teacher in the Secondary Dual Educator Program. Though the young team did not qualify for state, they are happy to be back in the Mock Trial competition. 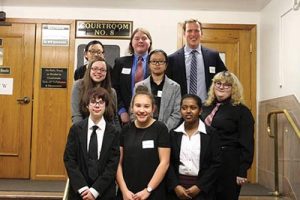 CREATIVE ARTS
Exciting things are happening in the arts department at Portland Christian. Students there won a combined total of 37 awards at the Portland Metro Scholastic Art and Writing Awards. 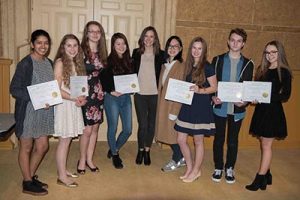 Jimin Oh, a senior and international student from South Korea in her fourth year at Portland Christian, has entered the Scholastic Art Awards all four years of her high school career, winning a total of 10 gold keys, five silver keys, and three honorable mentions.

When asked about her experience with the Scholastic Art and Writing Awards, Jimin said, “It is an exciting feeling to get recognized from other people, and [it] gives me an idea of how I am doing and ways that I can improve my artwork. Seeing other students’ work gives me inspiration for my own art.”

Here is the full slate of winners: 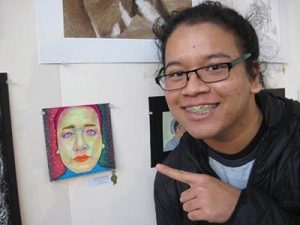 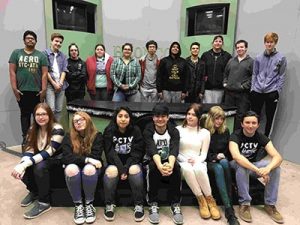 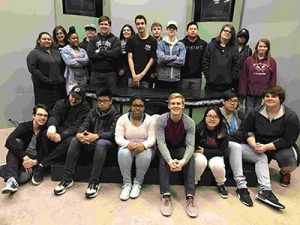 Parkrose High School advanced video students are finalists in the 2017 Oregon Young Employee Safety Coalition (O[yes]) “Speak up. Work safe.” statewide high school video contest. High school students across the state created videos that are full of drama, music, humor and engaging characters to bolster awareness about workplace safety. Each carried the central message of “Speak up. Work safe.” The O[yes] sponsors the annual video contest to engage teen workers, who are twice as likely to be injured on the job, according to federal studies.

The top three entries will take home cash prizes ranging from $300 to $500 and will earn a matching amount for their school. Winners had not been announced at press time. Videos can be viewed at www.youtube.com/playlist?list=PLM75uPd4sBhxqPsb1WYCJ7ZzEJqQMFleG. 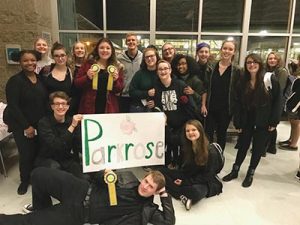 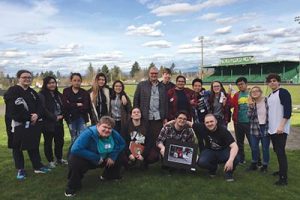 BOYS BASKETBALL
Last month, Parkrose boys hoops made history capturing third place in the state tournament, the highest finish for the Broncos in more than 30 years. After the Broncos posted a conference record of 7-7 and limped into the playoffs as the 14 seed of 16 teams, they made their second trip in a row to the eight-team OSAA 5A championship tournament in Corvallis by winning two roads games. 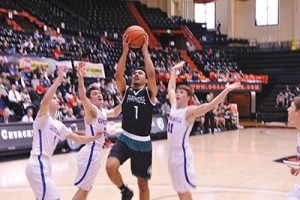 Despite being double-and triple-teamed much of the season, senior point guard and team captain Isaac Bonton led Parkrose to a third-place finish in the state tournament last month, the Broncos’ highest finish since placing fourth in 1983.
STAFF/2017

While playing without senior starters NaShawn Penney and Wilfried Likayi for most of the regular season—Penney returned to the squad for the last game of the regular season—the double overtime thriller against LaSalle the Broncos lost. Likayi, coming off a torn meniscus, was cleared to play a few games before the regular season ended, including against Milwaukie on Senior Night, and just in time for the tournament. “We were without two key players who we thought at the beginning of the year, we’d have all season, so we were up and down,” said Coach JC Alexander.  “People got minutes, people got to show what they could do, and everybody at some point in time in the season contributed to our success.”

In their first play-in game to earn a spot in the tournament, Parkrose traveled to Hermiston, beating the Bulldogs 65-50. That win sent them to Springfield. They took out the third-seeded Miller’s 64-67 to advance to the championship bracket in Gill Coliseum on the Oregon State University campus. 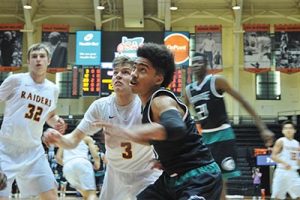 Because of injuries to key players, Parkrose’s seniors had to fill starting roles and help get the team to the playoffs. Senior Keandre Burton, foreground, was one of them. He fights for a rebound in the state playoffs vs. Crescent Valley.
STAFF/2017

The Broncos faced sixth-seeded Crescent Valley, dispatching them 73-59. Next up was eventual second-place finisher Churchill, out of Eugene. The Lancers dealt Parkrose an 83-66 defeat, setting up a matchup with conference rival La Salle Prep for third place. The Falcons had defeated the Broncos in two previous meetings, but with their full roster suited up, Parkrose won 76-69, claiming the third-place trophy.

Parkrose led the eight-team field in scoring offense averaging 71.7 points per game, free throw percentage (.800), steals (eight per game) and blocked shots (3.7 per game). The Broncos were second in rebounding average, with 35 boards per game, and third in assists, with 11 per game. Seniors Isaac Bonton and Wilfried Likayi were named second team all-state.

“He was nothing short of magical for us,” Alexander said of Bonton. “Between everything he did on the court, off the court. His leadership. He really took pride in the fact it was his senior year and he wanted to leave a legacy with Parkrose. Isaac and Thomas [Grant] spearheaded that and got everyone to buy in to leaving Parkrose their legacy.”

David Douglas High entered the OSAA 6A tournament seeded 14 in the 32-team field. The Scots beat South Eugene 71-64, but they were sent home by second-place Clackamas in the second round by a score of 78-63.

6A Madison High also made the field of the OSAA tournament, but they faced second-seeded and eventual third-place finisher West Linn in the first round, losing 98-45.

Columbia Christian High brought home the OSAA 2A fourth place trophy. The Knights defeated Union High out of eastern Oregon 60-37 to earn a trip to the eight-team championship bracket in Pendleton. They lost to Life Christian of Aloha 49-41 in the quarterfinals, but rebounded in the consolation bracket, beating Oakridge 65-45 and Vernonia 69-55 to earn fourth place. Senior Levi Dalzell earned second team all-state honors. 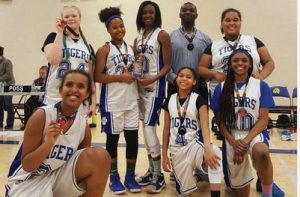 Portland Christian ended the regular season with a 10-6 league record. That earned them a spot in the OSAA 2A tournament, but the Lady Royals stumbled in the first round and were sent home by Coquille 72-50.

Likewise, City Christian earned a first-round OSAA 1A playoff berth on an 11-5 league record but lost to Western Mennonite 62-38 to end its season.

Parkrose earned the OCCA third-place trophy in the varsity 5A all-girl division.

DANCE/DRILL
Parkrose Elite Dance Team placed fifth in the show division of the OSAA championships at Veterans Memorial Coliseum. Ashley Cha and Sophia Nguyen were named to the all-state team. Nguyen also earned sixth place in the drill down competition. 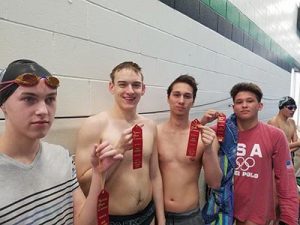