Local businesses provide employment for area residents and products and services close to home. Mid-county Memo Business Memos celebrate news, advancements, promotions, retirements, expansions and other noteworthy events at these cornerstones of our community. To share news of your business with our readers, Business Memo submissions for the May issue are due by Saturday, April 15. For best results, e-mail Darlene Vinson at editor@midcountymemo.com. You may also mail submissions to 3510 N.E. 134th Ave., Portland, OR 97230. To leave a phone message, dial 503-287-8904. The Mid-county Memo fax number is 503-249-7672. 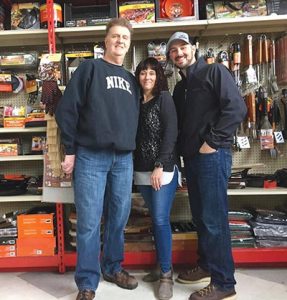 Simply Deals Discount owners Bob, Katie and Jason Carter pose for a picture in their new store in Parkrose. Last month, they moved into a space three times the size of their previous location a few doors down. Longtime Hazelwood residents, the Carters are holding a Grand Reopening celebration in April. COURTESY AUSTIN CARTER

Bigger store, bigger deals
Simply Deals Discount Store, the locally owned store in Parkrose operated by longtime Hazelwood residents Bob and Katie Carter and their oldest son Jason, is moving a few doors down from its longtime location to 10618 N.E. Sandy Blvd. The new store is on the same block as the old one with three times the space—which means three times the deals. Simply Deals will continue to serve the neighborhood with low prices and a wide variety of products. Simply Deals strives to provide quality products at rock-bottom prices. It buys name brand products at liquidation prices and passes the savings on to its customers. See the grand reopening ad in this issue on page 2.

The Carters live in the Hazelwood neighborhood, and Jason lives in Argay Terrace. “One of the reason we chose to stay in Parkrose was to help support our community and neighborhood,” Jason Carter said in an e-mail. “We want to be part of the revitalization efforts because we love Parkrose.” 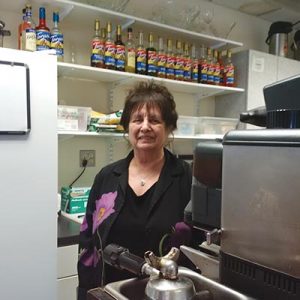 Mocha Mama’s: Food, beverages and community college pride
Every campus has its hangouts—those niches where students study alone or together, catch a snack or lunch, make weekend plans or just sit in a corner and read. The second floor of Mt. Hood Community College Maywood Park Campus is the home of Mocha Mama’s Cafe, a small but comfortable place to get a good cup of coffee, study or hang out. It’s accessible, located next to the elevator, and it offers a decent selection of sandwiches, pastries, specials and beverages.

Except for Monday and Wednesday evenings, you will find manager Neal Heiser on duty, making sandwiches and proffering various beverages and other goodies. Heiser came to Mocha Mama’s in 2014; he was formerly an employee of Ormsby at The Wedding House, a stunning Queen Anne mansion on Cesar E. Chavez Boulevard, now a bed and breakfast.

He says he started cooking on his own when he was four years old, and he first became a restaurant employee at the age of 14. He has done it all, from washing dishes to high-end catering, but he enjoys his work at Mocha Mama’s and the students he serves daily.

Perhaps it’s the small, cozy atmosphere of the Maywood Park campus—which was originally an elementary school—that gives him such a sense of pride for the facility whose students and staff he serves. He speaks knowledgeably about the Life Education for Adults of Parkrose (L.E.A.P.) students being trained to be employable, the English as a Second Language (ESL) and General Educational Development (GED) classes and how the campus offers U.S. citizenship courses. Heiser reflects the sense of passion of other Maywood Park Campus staff and employees. The Maywood Park campus may be small, but its staff and students are proud of what its graduates achieve. Heiser is one of its most enthusiastic supporters on campus.

Pat MacAodha contributed to this report.