Vision Zero: Plan for a safer Portland or hope trafficking?

In June 2015, Portland’s City Council unanimously adopted Vision Zero (VZ), a resolution to eliminate all serious injuries and deaths on Portland streets by 2025.

This is a laudable goal. But is it realistic, or is Portland’s version of VZ another reactionary attempt by politicians to make it appear they’re doing something—anything—to address the radical rise in Portland’s pedestrian fatalities?

On Dec. 1, 2016, the Portland City Council voted to adopt Portland’s new Vision Zero Plan, nearly 18 months in the making by the Portland Bureau of Transportation (PBOT). Even though Council passed the plan by unanimous vote, few details have been released.

Where did Vision Zero begin, and how did it work?
Sweden is recognized as the world leader as it began Vision Zero in 1997.

In the 20 years since Sweden adopted its national road safety program, traffic deaths have been cut in half.

While part of that reduction was due to stricter policing, most of the reduction resulted from a substantial infrastructure rebuild, which included spending millions for 12,600 safer pedestrian crossings (improved crosswalks, speed bumps and pedestrian bridges); more than 900 miles of redesigned roadways; and building separate corridors for different street users (transit, pedestrians, bicyclists and motor vehicles). Substantial speed reductions have also contributed to the success of Sweden’s Vision Zero.

Sweden’s successful efforts are a very different approach than Portland’s VZ plan now in place. Claus Tingvall, one of the developers of Sweden’s Vision Zero, stated, “If you take a nuclear power station, if you take aviation, if you take a rail system: all of them are based on [the idea that] they are operated by people who can make a mistake.”

That understanding should influence roadway design and redesign. “In every situation, a person might fail. The road system should not,” Tingvall said.

Norway and Denmark have adopted VZ policies, and VZ plans are gaining traction across America.

The NYC action plan uses a multipronged approach that emphasizes enhanced enforcement, improved street design and legislative proposals dealing with safety. The plan cites successes from several U.S. states that have implemented similar approaches with dramatic results, including a 43 percent reduction in traffic fatalities in Minnesota, a 48 percent reduction in Utah and a 40 percent reduction in Washington State.

Is it reasonable to expect traffic fatalities to fall without spending millions on redesigning Portland streets or developing new transit corridors?

With police saying they have dozens of unfilled positions before staffing levels are up to current needs, how can they consistently provide enhanced traffic enforcement throughout the city, let alone in neighborhoods east of I-205 that most need the enhanced policing, the same areas police have expressed concerns about enhanced enforcements and racial profiling issues.

Recent media events touting new flashing crosswalks that have been held since the initial adoption of the VZ concept—which implements rapid-flash crosswalk beacons, crosswalks, sidewalk installations and speed cameras—were not the result of VZ, but rather outcomes of programs and grants already years in the making.

PBOT’S version of VZ has yet to be implemented
The drafted Vision Zero Action Plan (VZAP) “Saving Lives with Safer Streets” addresses the street mayhem, according to PBOT. The VZAP is now available, and it gives the first detailed look at how Portland will work toward this ambitious goal.

Impossible to cover all the details in this space, the Memo has attempted to hit the high points here. To see the full 40-page VZAP document, go to portlandoregon.gov/transportation/71730 and click on the blue “Download a PDF Version of the Vision Zero Action Plan.”

While improved street design plays a significant role, the major thrust of Portland’s plan is to modify behavior—or at least control the outcomes of behaviors that lead to serious accidents—through education and increased alternatives to driving while impaired.

Still, Portland’s VZ plan is very different than the approach that brought such a dramatic success to Sweden and elsewhere.

The public approach to Portland’s VZ plan is: “Vision Zero will use fun, creative ways to engage Portlanders in Vision Zero. A local example is the Know Your Rights comic strip, which educates renters about their tenant rights.”

The plan intends to involve all parts of city government and the community using “Engagement and Accountability Actions.” Furthermore, “Vision Zero will leverage community resources and assets by mobilizing existing and new forms of community engagement. These include the creation of outreach groups such as Street Teams—formed to carry out Vision Zero education and outreach teams in neighborhoods—partnering with existing organizations such as Safe Routes to Schools. A community grant program will support the work of community members to help shape and improve the most dangerous streets that travel through their neighborhoods.”

The PBOT plan is data-and input-based, and it will monitor results based on accident statistics. According to PBOT, the VZAP resulted from sampled public opinion garnered online, at listening sessions, safety fairs and community events. The survey found those responding wanted street system safety improvements and reduced speeds, programs to educate all street users and a closer working relationship between all areas of local and state government. 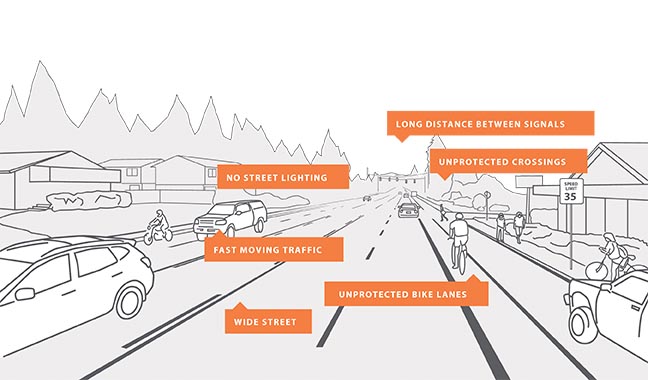 From PBOT’s VZAP:
Impaired Drivers (drunk, high or distracted) are to be controlled with these measures:
• Partnerships with Uber, Lyft, taxis and pedicabs to provide subsidized rides home
• Partnering with entertainment and drinking venues to educate patrons on the alternative travel options available
• Free or subsidized transit fares on days or events where heavy drinking is anticipated
• Arranging prepaid overnight parking so patrons know their cars will be safe if they remain downtown
• Targeted enforcement by police in high-crash locations and the use of speed cameras

Infrastructure Design and Construction:
Changing the nature of a street can lower speeds. At the heart of Vision Zero is the recognition that better street design changes behavior. Design elements that help reduce speeding can include adding vision cues that remind people that streets are for everyone; narrower lanes; on-street parking; more frequent crossings with signals or stop signs; street trees; sidewalk landscaping; wide sidewalks with active uses like café seating; and bicycle lanes with differentiated pavement color, treatments or marking.

That’s the plan, but will it work?
That question can only be answered years from now.

With seven of 10 Portland pedestrian fatalities occurring east of 82nd Avenue, the plan’s focus on the 8 percent of high-crash areas that account for 57 percent of all Portland fatalities should be welcome news to Memo readers. The 18 rapid-flashing beacons installed since the state-funded program of 2014—again, not a part of Vision Zero—were a first step (“Pedestrian fatality increase belies Vision Zero efforts” MCM May, 2016), but we should see significant improvements over the next eight years to the intersections and streets in our community.

So far, Portland is headed the wrong direction
From an unusually low 28 deaths in 2014 to a higher-than-average 37 in 2015 and an alarming 44 in 2016, the improvements made so far do not seem to be working.

We can look to where Vision Zero programs appear to have been successful, but even those have reduced but not eliminated serious injuries and deaths. What is clear is that the VZAP developed by Portland over the last 18 months has little in common with the programs that have shown substantial reductions (but not total elimination) of serious injuries and deaths in other cities.

Those programs are not based on community involvement and creative new ways to engage the community; they stress smarter, more traditional and safer (and, unfortunately, costlier) design and redesign of city streets teamed with increased law enforcement. They require strict enforcement of the laws by a larger police force. They require better and more thorough street design and redesign by capable and open-minded engineering staff. That requires a commitment of government and a large commitment of public dollars.

Portland’s Vision Zero is backed with zero dollars
The same understanding should influence roadway design, where traffic calming, well-marked crosswalks and pedestrian zones and separated bike lanes can help minimize the consequences of a mistake.

Per VZ philosophy, “In every situation a person might fail. The road system should not.”

For example, New York City’s VZ program emphasizes enhanced enforcement, improved street design and legislative proposals dealing with safety. Absent from New York and Sweden’s programs is Portland’s strong reliance on re-educating and working toward the behavior change of a constantly changing population. Present in both is a commitment to major capital investment in roadways and a design that puts the safety of the public first by examining all possible alternatives.

Human beings are not perfect creatures, and even the best make mistakes now and then. That mistake could result in a crash.

What is certain is there are people who will never be reached, like the driver who sped down the center lane on Southeast Hawthorne Boulevard and killed a teenage girl, or the driver who hit and killed a bicyclist on the St. Johns Bridge. The child who forgets just once and runs into the street after a ball or the jogger who runs out from behind a parked truck—those incidents will always happen, and those incidents can become serious injuries or deaths. 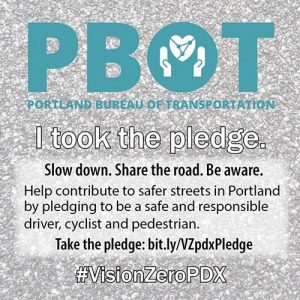 If you’re educating already prudent people, what effect will VZ have?
What Vision Zero can do is reach all the population and make most of us more aware and more thoughtful. The methods planned are experimental, and time for implementation is needed before results can be judged.

Since it is only possible to attempt to influence behavior, and impossible to control it, the one factor that the city and, specifically, PBOT can directly control is safer street design.

To reach its Vision Zero target, the city says that “every street project should be designed to achieve zero deaths and serious injuries.” While concentrating on the most dangerous 8 percent of Portland streets, PBOT can still make the other 92 percent safer, but it will take management practices different than those recently reported on by media in many areas of the city.

Vision Zero speaks of input by impacted “stakeholders” before designs are finalized and projects built, but PBOT’s current practices fail to do so.

Often, decisions are made without public knowledge and simply announced.

New traffic can be routed into a neighborhood (See Castlegate story on page 10) without requiring any input from residents or any technical study or review. Unlike many city bureaus, PBOT has no independent review or appeals process, and decisions are frequently returned for review to the person who originally made the decision.

A second set of eyes or a different point of view can catch innocent mistakes before they become dangerous conditions on our streets. A first step toward designing safer streets for Portland is to bring PBOT up to the standards and practices of other Portland bureaus.

PBOT has about 800 employees and last year’s budget was about $330 million, round figures, according to Dylan Rivera, PBOT’S public information officer.