Home » 2016 » After School Satan Club gets Christians to protest
Thu08

After School Satan Club gets Christians to protest 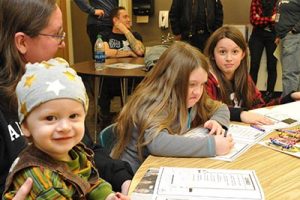 Parkrose’s Sacramento Elementary school may have witnessed history in the making on Nov. 16 as the Portland chapter of the Satanist Temple held an open house for the After School Satan Club that will start holding meetings there next month. As befits such a momentous event, it was something of a circus, complete with guest performers.

Since Wednesday is an early-release day at the school, the open house took place at 11:45 in the morning. School let out an hour early to allow parents to fetch their children before the ruckus began in earnest.

Finn Rezz, co-head of the local chapter of the Satanic Temple, which is operating the club, was not happy with the decision to close the school early, in part because it minimized exposure to his group. “That undermined us quite a bit,” he told the Memo, “but we’re happy. We’ve had a few parents who came in to talk to us.”

“We’re hoping to make clear what it is exactly that we’re doing here and why, and hopefully discuss [it] with parents while we’re here,” Satanic Temple co-founder Lucien Greaves said. He flew in for the occasion along with head of the Detroit Satanic Temple, Jex Blackmore.

Meanwhile, Drake Grimberg, 9, and his sister Lucia, 7, who do not attend Sacramento Elementary, amused themselves coloring in the innocuous-looking Satanic Children’s Big Book of Activities as their mother Holly Nichols, wearing a “Hail Satan Est. 666” hoodie, looked on. The youngest Grimberg, Ulysses S., looked bemused but comfortable as he perched in his mother’s arms.

Onlookers milled about and a dozen or so protesters lined up on the sidewalk in front of the school, including some from Pennsylvania who came to chant Hail Marys to the accompaniment of a bagpipe.

Local resident David Kuretich, a former Catholic who attended Sacramento Elementary, came by to express his support. “I really believe in children being able to think for themselves and not being told, ‘this is how it is,’” Kuretich said. “There’s a big thing about not allowing bullying in schools, and yet this club [Good News] comes in and tells small children they’re sinners.”

The club Kuretich and Nichols—obliquely—were referring to is the Good News Club, sponsored by the Warrenton, Missouri-based Child Evangelism Fellowship. It is important to note the reactionary nature of the After School Satan Club, run by volunteers affiliated with the Satanic Temple, headquartered in Salem, Massachusetts. After School Satan Clubs will only operate in schools where the Good News Club is present.

The Child Evangelism Fellowship has been around since 1937 and claims on its website to have 77,000 Good News Clubs worldwide. The group’s stated purpose is “to evangelize boys and girls with the Gospel of the Lord Jesus Christ.” The clubs have been in Oregon since at least the 1990s. In 2001, the Child Evangelism Fellowship went all the way to the Supreme Court to establish the right of religious groups to be present in public schools that allowed outside groups. That same ruling guarantees a place for the After School Satan Club.

Child Evangelism Fellowship faced organized opposition when it targeted the state for expansion in 2014. It succeeded in establishing a club at Sacramento in the 2015–2016 school year anyway, but it has been keeping a low profile, refusing earlier this year to tell Willamette Week which Portland schools have Good News Clubs. A local representative of the group, Ron Imig, told The Oregonian that there are five Good News Clubs in Portland elementary schools, but he also declined to specify which ones.

According to a press release prepared for its Portland premiere, “After School Satan Club is intended to provide an alternative for parents who are interested in after-school activities but don’t want their children exposed to the Good News Club’s fundamentalist evangelizing.” The After School Satan Club’s goals do not include proselytizing. Rather, it “exposes children to different belief systems and encourages them to think for themselves.”

The Satanic Temple describes itself as “a non-theistic religion [that] sees Satan as a mythical figure representing individual liberty and freedom from obedience to tyrannical authority. Values held by The Satanic Temple include individual autonomy, critical thinking, science-based education, social justice, and the separation of church and state.”

Protesters at the school were having none of it, however.

“We know people are very much afraid of Satan and Satanism and what it represents,” Jack Burnham from the America Needs Fatima organization of Pennsylvania told KOIN TV. “There is nothing positive about a Satanic club, you know. Satan is Satan,” said Jose Delgado, whose eight-year-old daughter attends Sacramento.

“We are way on the low ground in the court of public opinion,” Rezz acknowledged. But he was confident of winning over “most reasonable people, once they know who we are and what our values are.”

Stuck in the middle of all of this is the school administration. “Parents are angry that we did not request input but it is completely disingenuous to ask for input and then have to grant permission anyway based on our legal requirements,” district superintendent Karen Gray wrote to parents in September, when the After School Satan Club’s plans were announced.

Gray said later in an email to the Memo, “While I remain very unhappy regarding the disruption of the educational environment for our children and staff, Parkrose will abide by the laws of the land regarding open access … and we will continue to keep student safety as job number one.”

Judging from its Facebook page, the Satanic Temple has been active in Portland since March. The national organization has a distinct flare for the dramatic, as well as for political maneuvering. It has, among other things, tangled with the notorious Westboro Baptist Church, pressed to display a statue of the mythological horned goat entity Baphomet in the Oklahoma State Capitol building (near a monument to the Ten Commandments that was later removed) and claimed that restrictions on abortion access in Missouri impinge on its religious beliefs.

The After School Satan Club’s appearance at Sacramento Elementary has attracted the attention of Rolling Stone magazine and The Telegraph newspaper of London (which felt the need to include a map of the U.S. West Coast to orient its readers). “If they want to set up shop at your local school, they can,” warned a local news broadcast in northeastern Texas, as it showed bits of a tongue-in-cheek corny promotional video for the club. Stations in Pittsburgh, Columbus and Milwaukie made similar declarations.

There are eight other clubs in the works, according to Greaves, and the next one should start up in Seattle next month. “We’ve gotten a flood of interest from parents concerned about the Good News Clubs,” he said. An attempt to set up a club in Nehalem earlier this year seems to have been unsuccessful. Judging from the sparse media coverage it received, it did not resonate deeply with the public.

The After School Satan Club will meet monthly on Wednesdays at Sacramento. The first meeting is Wednesday, Dec. 14. Like the Good News Club, it requires written parental permission to attend.