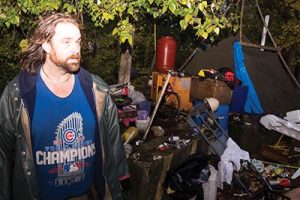 In November, Danny Ferron was told that he and the other four denizens of Slough Town must pack up and leave. A local pastor, the Historic Parkrose revitalization group, the neighborhood association and even the business association made a thoughtful effort to make the Parkrose homeless camp work for all parties this summer. For a while, it did.
STAFF/2016

Parkrose, a small, often unchartered island in Portland’s greater political sea, has inspired citywide change when it comes to challenging the growing homelessness issue. However, Parkrose’s highlighted community outreach has also unveiled tensions between the city and private business owners over one crucial spot: the Columbia Slough.

Mingus Mapps, Historic Parkrose District manager, is a leading facilitator who has formed an unlikely alliance with Jason Jones of the local police department and Joshua Kingsley, an Episcopalian reverend from St. Matthew’s Episcopal Church, in the hopes of dramatically improving the conditions for the Parkrose homeless who currently populate the Slough’s banks. Mapps is notably relentless.

“We did a listening session about a month ago, that was a resource fair for the homeless,” says Mapps. “We invited homeless people to talk to the people they need, so they could get an ID or resources for housing. We don’t have our next one scheduled yet, but we’re planning another one soon.”

However, Mapps’s contributions may shine only momentarily. The homeless population has set up camp at “Slough Town,” as reported by Willamette Week (“How One Portland Neighborhood Learned to Stop Worrying and Love the Homeless” Aug. 2), but their settlement has caused a variety of reactions from locals to nature preservationists with markedly different interests, both fiscal and environmental.

“You have the homeless people who live at the Slough,” explains Mapps. “Then the businesses adjacent to the homeless camps that are not psyched about it, and then you have the Portland Bureau of Transportation (PBOT) with environmental interests, like the preservation of the Slough.”

As it turns out, PBOT is looking to turn over ownership of the Slough to local business owners, reverting the land from public to private. Yet, there are liability issues. Business owners question what has been dumped in the river over the last seventy years. Moreover, business owners like the notion of dismantling the homeless population, yet they aren’t keen on the prospect of having to look after the Slough themselves.

“In the next year or so, the city wants to give the property back to the businesses,” says Mapps. “But the businesses don’t want the property: they want the homeless people gone and access to the space closed off. The Columbia Slough Watershed Council, the stewards of the Slough, feel it’s an important public resource and that it should remain open to the public.”

Meanwhile, the dissenting Parkrose Neighborhood Association thinks the Slough is a valuable public resource that shouldn’t be locked up. Ironically, the PNA believes the homeless camp is deterring the Slough from becoming a meaningful public space.

The battle, it seems, may ultimately land out of Mapps’s hands. This uncertainty has encouraged Mapps and Jones to keep searching for new solutions that may help the ailing homeless. “Typically, the message I’m telling people as a police officer is that I represent everybody, not just residents or businesses, and part of that representation includes the houseless community,” says Jones. “What we try to do is hold listening sessions between businesses and residents and the houseless community, looking for overlapping themes and a shared vision for problem solving.”

Jones intends to hold a homeless resource fair twice a year. Mapps, on the other hand, has been focusing on working with the larger city government. Mapps notes that Ben Mauro, the housing resource development coordinator in Charlie Hales’ office, has submitted a bill that would make it legal for some homeless personnel to sleep in RVs in church parking lots. Another solution provided by the bill calls for the construction of tiny houses, also set up to house the homeless via church parking lots.

“The proposal has basically been approved, but it’s in sort of a case study phase,” says Mapps. “It’s hard to find property that works for something like this.”

Still, whatever the outcome, Mapps and Jones remain hopeful that the colony of Slough Town will have nowhere to go but up.

Slough Town update
Surrounded by the detritus, junk and garbage of a long-established homeless camp, Danny Ferron, the self-described “homeless by choice” meth addict featured in the Willamette Week, said he and the four others who have been living there since June 2015 were told recently by “the city manager” that they must leave. Asked where he is going, Ferron, who goes by the nickname Gilligan, said, “I’m not sure; I’ve been having a lot of problems lately.” Due to friction between him and the supervising corrections officer, he said the deal for Inverness Jail work crews to pick up and remove Slough Town’s trash is gone. In addition, Ferron said his tools were recently stolen when he was away, and the day after Thanksgiving he and a visitor had their bicycles stolen at gunpoint. Asked if Mr. Mapps from Historic Parkrose is helping him move, Ferron said, “He’s doing what he can to help me move. He’s trying to get me as much time as I need. They were very nice; they’re really really understanding. All the people I’ve dealt with have been very very kind and generous.” 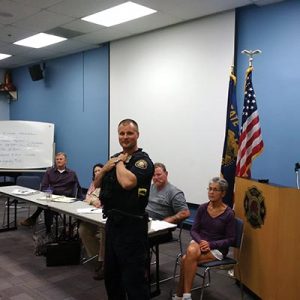 Jason Jones, district police officer in Parkrose for the last four years, is leaving east Portland to enter the Behavioral Health Unit, where he’ll be working as a crisis intervention team coordinator. He is pictured at a Argay Terrace Neighborhood Association meeting in 2015.
STAFF/2015

Officer Jason Jones update
Jones is leaving Parkrose after four years to return to his roots. He is entering the Behavioral Health Unit, where he’ll be working as a crisis intervention team coordinator. Here, he’ll train cops in providing the indiscriminate sympathy and help that has defined his own career, and he’ll also get to work closely with those with problematic behavioral disorders. For Jones, this is a passion project.

“This opportunity just came up, and I was convinced,” explains Jones, a Northern Californian native. “It was a competitive position and I was selected. I’ve been a police officer for 17 years, but I have a master’s degree in behavioral science, which is why I care so much about the mentally ill.”

But Jones doesn’t plan on giving up on the Parkrose community, as he continues to oversee several unique projects he personally designed. “I’ve got interns working for me who will make sure to see projects to their completion,” says Jones. “One of those is a toolkit for abandoned houses, which explains to residents what they can do when they see an abandoned house with people occupying it. The toolkit gets through the layers of bureaucracy to get those houses taken care of, and we’re now doing the same thing with RVs.”