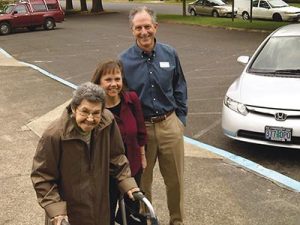 Bill Gates, the pastor at Parkrose United Methodist Church since 2002, left the church in October to work in Portland’s Woodlawn neighborhood. He’s pictured greeting parishioners before a service in 2009.
STAFF/2009

Bill Gates is leaving Parkrose United Methodist Church a much different place than when he found it.

When Gates first inherited the Sunday morning microphone as PUMC’s new pastor midway through 2002, he believed his audience to be “adversarial” when it came to the potentiality of ethnic diversity within the church. Now that he’s semi-retiring and leaving this space behind, he notices a huge difference. There are now four additional fellowships that share PUMC’s walls: one is Hispanic, two are African-American, and one is largely constructed of Eastern-European immigrants.

And though PUMC is still not notably integrated, Gates believes members are more conversational about the staggering growth of diversity within the community as well as the additional fellowships that practice within PUMC’s space.

“People now work together; they relate to one another and share the same space,” explains Gates. “We transitioned to being more neutral and more proactive about building relationships. It took ten years to get through this transition, but there’s a different attitude now. The folks who were there when I arrived were still living out a memory from the 1950s.”

Gates, a pastor marked by his willingness to connect with all people, regardless of their background, is praised for his indiscriminate servitude.

Linda Grimes, who has been with PUMC since 1984, accepts Gates and his accomplishments. “Our ministry field is the world around us. You have to engage with it and be effective,” says Grimes.

Like a surprising number of modern pastors, Gates’ journey to the podium did not begin by growing up in the religion he would later teach. Gates was raised Episcopalian and wasn’t formally introduced to Methodism until he married his wife, Pam. Pam did grow up a Methodist, and during the couple’s mid-20s, they decided to connect with Pam’s roots while they were living in Southeast Idaho. At this point, Bill was a CPA.

“I didn’t like sitting behind a desk,” says Gates. “From the very beginning of my business career, I was looking for a better connection with people or causes. I had gotten involved with high school kids at our church, and I had become a camp adviser and camp counselor. It just clicked; it was the right thing at the right time.”

But how did Gates end up in Portland and at PUMC?

“We spent five years in Berkeley while my wife was in school studying architecture. We were invited to move to Portland by the Methodist church, as a lot of the denominations are broken down by geographical boundaries,” explains Gates. “We’ve been in the Portland area for 25 years. The outdoors part of it worked well. I grew up in Denver and Colorado and New Mexico, so mountains are very important to me. Part of my spirituality is the outdoors.”

First appointed to Lake Oswego Methodist Church, where he served for five years, Gates didn’t feel the same connection that he later would with Parkrose. Gates elected to take an open position at Parkrose after he was cut from the Lake Oswego church due to a lack of funding. Gates was eager to take on the Parkrose neighborhood, as he saw one of its central issues being the swift change in local demographics. Compared to Lake Oswego, there were many more sociocultural boundaries between newer and older resident populations.

Gates claims that when he first showed up at PUMC, its original pastor was still a face in his crowd, as were many individuals who had been with the church since its birth in the 1950s. Now, the church is much more privy to dialogue with people who don’t stem from the white picket fence reality of old Parkrose.

“When I first took the position, there was a lot of distrust of pastors,” says Gates. “What I left behind is people having trust in themselves and other people, and I think I helped people reach out to those people who are different than they are. I think this led to a more multicultural community; now church members honor some of the diversity.”

In October, Gates passed the baton to PUMC’s incumbent pastor, Emma Donohew, who happens to be a millennial woman; Gates continues to work in community organizing. Currently, he spends much of his time working in the Woodlawn neighborhood, which is attractive to him as he builds relationships with local stakeholders, neighborhood associations, schools and the larger business community.

But will Gates ever return to the church as something other than an observer? Never say never, he says, but not yet.

“We really need to give an ex-pastor space for at least a year or so, but I live in Southwest Portland, and I have some other options for my spiritual development and church engagement,” says Gates. “I’m hard-headed, so I really need to vacate the area so Emma has a chance to be herself amid some great new people. I’m not involved with them right now, but in another year, who knows?”

Let’s hope that a reunion comes about sooner rather than later.