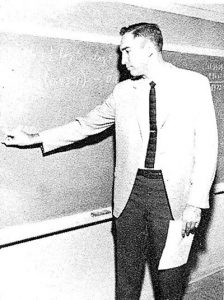 Holznagel was a native Oregonian who was born in Hillsboro and attended elementary and high school there. After three years in the U.S. Army, he attended Eastern Oregon College graduating in 1959, and received his master’s degree there in 1961. While at EOC he met future wife Jean Adamson. They married in June 1958, soon settling into teaching jobs in the Parkrose School District.

Holznagel began his career in education in 1959 as an elementary and secondary math teacher in Parkrose. He received a Fulbright Teacher Exchange award, spending the 1963–64 school year as a math teacher in London. Upon his return, he joined a computer education project in Marion County in 1968, and he continued his work in curriculum development and teacher training in education technology in a statewide school district cooperative in Minnesota for ten years. Holznagel returned to Oregon in 1980 to work in the technology program of the Northwest Regional Educational Laboratory in Portland, where he did research and development in educational technology for school districts in five northwest states. He was director of the program from 1983–96, leading an effort to introduce the Internet as an educational tool across the region. In 1996, Holznagel became director of technology at the Southeast Regional Laboratory at the University of North Carolina at Greensboro; he completed his professional career as executive director of that laboratory in 1998. Retiring at the end of that year, he and Jean moved to Cannon Beach.

Throughout his career, Holznagel was active in professional organizations and served as national president of the Association of Educational Data Systems in 1980. Because of his interest in the history of his family, he was a member of the Genealogical Forum of Oregon, serving on its board of directors beginning in 2005 and as president from 2007 to 2009. He also volunteered as a member of the board of directors of the Rose Villa Retirement Community from 2007 to 2014 and served two years as its president.

In addition to Parkrose and Cannon Beach, Don, Jean and family lived at times in Salem, Hillsboro, West Slope and Atlanta. Don is survived by his wife, Jean, two daughters, Kara Baker and Kristin Kruse, and three granddaughters. The family held a private memorial service.