Local businesses provide employment for area residents and products and services close to home. Mid-county Memo Business Memos celebrate news, advancements, promotions, retirements, expansions and other noteworthy events at these cornerstones of our community. To share news of your business with our readers and for best results, e-mail Darlene Vinson at editor@midcountymemo.com. Submissions for the January issue are due by Thursday, Dec. 15. You may also mail submissions to 3510 N.E. 134th Ave., Portland, OR 97230. To leave a phone message, call 503-287-8904. 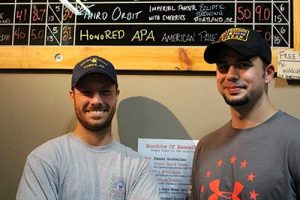 Special brew honors vets, supports UWS
University of Western States, 2900 N.E. 132nd Ave., received a boost from some of the veterans it serves through the Returning Veterans Project and Ordnance Brewing in Wilsonville.

The brewery donated proceeds from the sales of a veteran-brewed beer called HonoRED Ale to UWS in honor of Veterans Day. UWS is an integrated health care university in Northeast Portland that provides free chiropractic and massage services to veterans at its Russell neighborhood outpatient campus clinic.

At the event, veterans Allen Raanes and Matt Eide tapped the ale and distributed complimentary tastings among guests at the brewery. Ordnance will continue to collect donations for UWS until the HonoRED Ale has sold out at its Wilsonville Taproom, 9740 S.W. Wilsonville Road.

Some of the veterans who helped brew HonoRED Ale have received care at UWS clinics and recommended the school benefit from sales of the special brew.

Montavilla lights up for Frosty Fest
Windows of businesses all over Historic Downtown Montavilla, Southeast Stark Street between 76th and 82nd avenues, will be filled with spectacular, eye-popping visual displays for all to enjoy during the district’s annual Frosty Fest. Visitors to Montavilla can vote for their favorite window display through Dec. 19.

These holiday displays will create a beautiful backdrop for the Merry Montavilla Soiree Friday, Dec. 9. The Soiree, a holiday pub crawl, will feature businesses offering food and drink specials. Attendees are encouraged to bring warm winter clothing to donate to JOIN, a local nonprofit that supports efforts to transition homeless individuals and families into permanent housing.

Saturday, Dec. 10, Santa will appear at Southeast 81st Avenue and Stark Street. Crafts and hot chocolate will be available.

“The event has always been a great way for the community to come together and celebrate the holiday season,” says Brooke Brandsmith, one of Frosty Fest’s lead organizers. “It gives people a chance to check out some one-of-a-kind items, support local business and share their holiday spirit.”

Gateway Namaste opening soon
The much-delayed restaurant Namaste Indian Cuisine, 10306 N.E. Halsey St., says it hopes to open this month. The restaurant was originally slated to open in the fall of 2015, and then September 2016. Owner Harjinder Chand said the restaurant’s opening hinges on a new Nov. 28 inspection. Previously it faced delays with the city relating to payment responsibility for street improvements around the restaurant.

Church expands to accommodate growth
St. Joseph the Worker Parish, 2400 S.E. 148th Ave., has begun work on a $4.2 million renovation of the parish sanctuary and social room. The Parish was established on 10 acres in 1955. Since then, the socioeconomic changes in the area have been dramatic due to a steady decline in family-wage jobs, increased housing density and an increasing immigrant population.

The parish is thriving with over 1,200 families. In its present state, St. Joseph the Worker church cannot accommodate its growing community. Masses are overcrowded in the sanctuary. Parish social events are limited by size and inaccessible to people with disabilities. The active social justice ministry lacks sufficient space for food, clothing and services to the community’s poor.

Several outside donors contributed more than $1 million to the project. The balance of the building fund has come from parishioners and friends who have committed to underwriting the project with annual donations over five years.