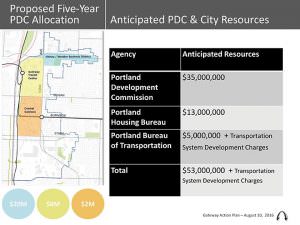 The proposed five-year PDC allocation in Gateway and source of the funds.
COURTESY PORTLAND DEVELOPMENT COMMISSION

There’s a new five-year plan on the city’s books, and it’s all about Gateway.

It was finalized Aug. 10, when Portland city council voted unanimously to approve the five-year, $53-million Gateway Action Plan (GAP). The plan seeks to invest in Gateway by focusing the remaining five years of its urban renewal area, which the city admits has underperformed, on specific targeted areas. The GAP will focus on three areas deemed to have the highest growth potential: the Halsey-Weidler Business District, Central Gateway, and the Gateway Transit Center.

First brought before the community in the spring of 2016, the GAP features several tweaks in response to neighborhood feedback and concern that local urban renewal isn’t investing in the correct kinds of projects to grow Gateway.

Leila Ahman, the Portland Development Commission’s newly appointed project manager for the GAP, highlighted some of those changes.

According to Ahman, residents would like to see the Halsey/Weidler Business District expanded upon, mixed-income rather than purely subsidized housing and money set aside for new opportunities in the area as they arise.

As a result, $5 million was allocated away from Halsey-Weidler to the newly created Opportunity Fund. In total from the PDC, there will be $20 million allocated to the Halsey-Weidler Business District, $8 million to the Gateway Transit Center and $2 million to Central Gateway. The Portland Housing Bureau and Portland Bureau of Transportation will also be investing $13 million and $5 million, respectively, into Gateway during the GAP.

Justin Douglas, policy manager for the PDC, also testified to City Council before the approval vote.

“I often get asked about Gateway—well—‘Why don’t we see more there?’” he said.

Douglas explained that because Gateway wasn’t a part of the city of Portland until the 1980s, it has undergone a slow transition from a rural and suburban community to the desired dense urban one.

He also hinted at how the PDC might accommodate the public’s wish for more mixed-income housing.

Referencing the currently proposed 40-unit housing project being built at Northeast 106th Avenue and Halsey Street, which received some of the loudest feedback for not including market-rate housing, Douglas mentioned the possibility of workforce housing at the site. He explained that similar to a project at the Lents Town Center, the units could also feature rents of 80 and 100 percent median-family income, rather than the more heavily subsidized 60 percent MFI and smaller rents proposed currently.

“We have shared with the development team that if they are able to craft a project with a program that has mixed-income housing, we would consider supporting a project like that,” said Douglas.

Residents and community leaders were also on hand to comment on the new GAP.

Tom Badrick, chairman of the Parkrose Heights Neighborhood Association, said, “There is tremendous opportunity in Gateway, and we have been waiting a very long time for when things turn the corner and we become what we’ve always been destined to be.”

Nidal Kahl, a local business owner and chair of the Halsey-Weidler Group, which will help implement parts of the GAP, added that “one of the primary successes in just the development of this plan is the level of engagement that the PDC focused on in the community. They really got the community involved.”

There are numerous implementations of Gateway urban renewal plans in the coming year, including construction on the Halsey-Weidler Business District streetscape project, along with Gateway Discovery Park and the adjacent housing development on 106th and Halsey. The GAP, along with the Gateway Regional Center Urban Renewal Area, expires June 2022.