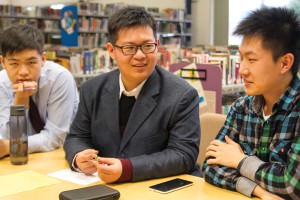 Karen Fischer Gray wants Parkrose High School to have an exchange program with a Chinese school. As district superintendent, she’s been working to make that happen since 2012, when she was in the first group of superintendents invited to a new cultural exchange by the Confederation of Oregon School Administrators.

Fischer Gray said when she was superintendent in Coos Bay before coming to Parkrose, they had a cultural exchange program with Great Britain, and the benefits were both emotional and intellectual. “China and America are vastly different in many ways and learning about other people’s culture makes us more tolerant, appreciative and loving towards other countries and their people,” she said in an email in response to questions. “The kids make new friends for life and gain a realistic understanding about other cultures from the inside; it’s very powerful.”

Through collaboration with Jinan Foreign Language School, a full-time, privately run boarding school in China’s Shandong province, Fischer Gray said she is hoping to add a Chinese language class to the high school’s curriculum in the 2016–17 school year. Jinan is willing to place one of their bilingual teachers at the high school at no cost to the district.

In addition, a year from now, Gray said she, along with a bilingual friend of hers that is connected to the project, are chaperoning at least six and possibly eight PHS students to China, with students fundraising for their trips. 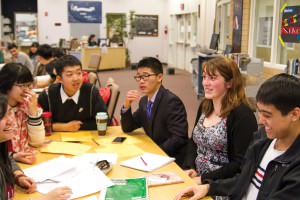 In 2015, during the district’s winter break, Fischer Gray visited Jinan—at her own expense, not taxpayers—to see if it was a good fit. “It was wonderful,” she said. “We will be starting a new China Exchange Club at the high school, which I will lead.”

In February, for the second year, 19 Jinan students visited Parkrose as part of their two-week visit to America. Because many Jinan students matriculate to top colleges and universities in the United States, it’s important for them to get a sample of America and its schools, said Adele Huang, whose Asia America Education Service facilitates Chinese student exchanges. Mark Zhou, 15, said he is taken aback at the lack of traffic in America. According to Zhou, Jinan traffic is gridlocked much of the time. Jinan student Jordan Gao said there’s “too much air” here, as he is used to experiencing smog at home most days. This is not a surprise when you learn that Jinan has nearly seven million residents in its metro area. Classmate Tammy Liu, 15, said the food she’s sampled has “too much oil” on it, while Joe Liu, 16, who had never experienced dairy products before this trip, said “no more cheese, please” on his food. 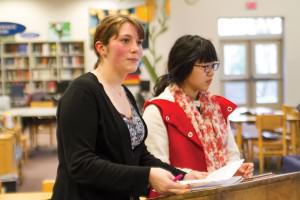 Student Alillith Fernee, 15, left, is one of six to eight Parkrose students that committed to raising money for their own trip to China in 2017.
STAFF 2016

Fischer Gray said the program emanates from her love of foreign exchange and travel. “I am connected to the Chinese community via my friendships in Portland, and I know how much my own children and I got out of having a cultural experience in a foreign country,” she said. “I wanted this experience to be available to kids at the high school. It really changes your life and how you see the world. I see it as one way to foster world peace in our time.”