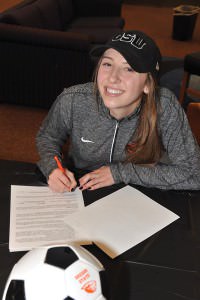 Parkrose High School’s Jada Krening signs her letter of intent to play soccer at Oregon State University in exchange for a four-year scholarship. In addition to setting many school records as a four-year starter, Krening, was named OregonLive’s Oregon Girls Soccer Player of the Year.
STAFF/2016

In front of friends, family, coaches, teachers and media, Parkrose High School soccer standout Jada Krening signed a letter of intent to play at Oregon State University on February 3, National Letter of Intent day, in return for a four-year scholarship. “I feel so loved right now,” Krening said after remarks by her coaches at the event held at the school.

The first girls soccer player from Parkrose to sign a Division 1 Pac-12 scholarship, Krening said her biggest accomplishments were being named OregonLive’s Oregon Girls Soccer Player of the Year, setting a school record of 81 goals in four years and committing to the Beavers by the end of her sophomore year. “Jada is an outstanding student athlete with great leadership [and] great work ethic. [She] defines what perseverance is,” said Pho Lau, her high school coach.

“It’s not a full scholarship,” said proud parent Mark Krening at the signing event. “What she got was an amazing offer.”

In addition to benefits derived from her athletic prowess, Krening receives financial help because she carries a perfect 4.0 grade point average. “By the time you tack on her academic [offer] combined with the athletic, it’s going to be pretty close to full [scholarship],” Krening said. “We’re really proud of her academics.”

According to its website, OSU estimates in-state students paid $24,600 during the 2014–2015 school year for a standard, full-time course of studies.

Why OSU? “I wanted to stay in Oregon,” Jada Krening said. “But I wanted to go to a bigger school, and OSU was …” “They got her fairly early,” her mom Jeannie said, finishing her daughter’s thought.

Krening’s Parkrose roots are deep. Both parents are Parkrose born and bred, and they graduated together in 1986. Krening said although he played competitive hockey and baseball in high school, his wife wasn’t as involved in athletics, but both always believed athletics have value. 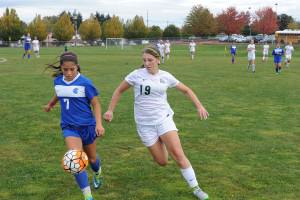 Krening, right, led Parkrose to the playoffs for the first time in 2014 when she was a junior. She keeps her eye on her opponent and the ball here in a game against Hillsboro in 2015.
STAFF/2016 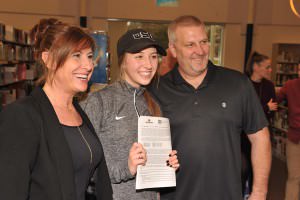 Jada Krening, flanked by proud parents Jeannie and Mark, is all smiles on National Letter of Intent day after signing a commitment to Oregon State University in front of coaches, friends, teachers and family.
STAFF/2016

Krening coached his daughter’s soccer teams when she was younger and recognized that she was always a bit better than everyone else. “I coached Jada when she was younger, ’til she got to the point where I knew she was way above what I could do.” Seeing she needed better coaching, Krening said when she was 10 they switched her from a recreational team to the more serious and competitive EastSide Untied FC (now Eastside Timbers). “The rec thing wasn’t really a challenge,” he said. “When she was 10, she was always a little bit better than everybody else, and she’s very athletic. And then every year she just kept getting better.”

So far, switching to the new club was the hardest thing Krening said she had to do. “I was at one club for most of my childhood; I went over to another club and it was hard for me to adjust.” Not only adjusting, she excelled, playing with EastSide United FC through the 2013/2014 season. In 2014, she was selected for the Portland Thorns women’s professional soccer team Academy Team, continuing to their under-18 team as well.

Is there anything this high-achieving teenager does to annoy her parents? While her mother describes her as tenacious, dad Mark sheepishly admitted his daughter inherited his stubbornness. And because she is whip-smart, she has developed an informed viewpoint. “She’s very opinionated and very stubborn, but in a good way,” Krening said. “We always say she should be a lawyer.”

Unbeknownst to the Krenings, Feb. 3 also happened to be the 30th anniversary of National Girls & Women in Sports Day. Their mission statement sounds like Krening’s life script. “We know that when girls participate in sports, they develop the leadership skills to excel in school, at home and in their communities,” their website says. “The courage, confidence and character gained through physical activity are the very tools girls need to become the strong leaders of tomorrow.”