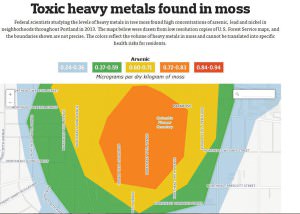 Recently, it was reported that there are two airborne cadmium, arsenic and hexavalent chromium hotspots in Portland near glass factories. The hotspots were identified from mapping data of tree moss toxic chemical analysis by U.S. Forest Service scientists. Now it is known from maps provided by the U.S. Forest Service and overlaid with a Portland grid that there are more than just two hotspots.

One of five easily identified arsenic hotspots on the map is a region of Parkrose in Northeast Portland bordered by 93rd and 100th avenues to the west and east and between Prescott and Killingsworth streets to the south and north. The arsenic in moss in that region measured in the second highest of five identified ranges, making the Parkrose hotspot that is orange (surrounded by a much larger area of yellow–the middle range) only slightly less important than the two previously identified ones that were red (surrounded by much larger areas of orange—the Parkrose range).

According to sources including the Oregonian, “The colors reflect the volume [sic: concentration] of heavy metals in moss and cannot be translated into specific health risks for residents.” The Department of Environmental Quality has placed air sniffing or monitoring equipment near the two red hotspots associated with glass manufacture, but it has not placed air sniffing equipment near the other hotspots, including Parkrose. “Just because the moss maps show a hotspot doesn’t mean it’s that hot or relevant—it’s just showing the highest value in the moss dataset,” said Jennifer Flynt, an agency spokeswoman, according to the Oregonian. “We can’t know the significance of these values until they are calibrated with monitor data,” she concluded, again according to the Oregonian.

Arsenic can have high natural concentrations in groundwater, mineral ore and geothermal effects of, for example, nearby volcanic activity. It also can be a byproduct of certain commercial processes, including semiconductor manufacture, smelting, glass production and paint production. Other sources include algaecides, desiccants used in mechanical cotton harvesting, herbicides (such as weed killers) and nonferrous alloys, according to the Agency for Toxic Substances & Disease Registry.

It is not yet known whether any of such historic commercial processes would explain the high airborne arsenic levels in the Parkrose hotspot and surrounding areas.