If you’re sending a submission, include all details that apply: individuals’ names, details of the milestone and a contact name and phone number. If you have photos, send them. The submission deadline for April issue is Tuesday, March 15. For best results, email editor@midcountymemo.com or mail submissions to 3510 N.E. 134th Ave., Portland, OR 97230. Call 503-287-8904. 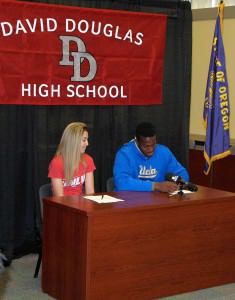 Kennedy Allen, a DDHS senior looks on as classmate Osa Odighizuwa pens his signature to an NCAA Letter of Intent committing to play football at UCLA. Allen made a similar commitment to the track team at UNLV.
COURTESY DAVID DOUGLAS SCHOOL DISTRICT

Scots athletes sign National Letters of Intent
David Douglas seniors Kennedy Allen and Osa Odighizuwa committed to their universities of choice by signing NCAA Letters of Intent last month. Allen will be taking her distance running talent to the University of Nevada, Las Vegas. Odighizuwa will follow in his big brother’s footsteps by signing to play football at UCLA. They may be moving on in the fall, but they will always be Scots. 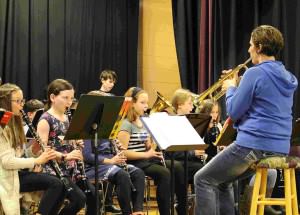 PCS elementary student talents showcased
Portland Christian Elementary School celebrated the artistic talent of its students last month at its annual Student Showcase. Family and friends dropped in to view the art displayed throughout the campus and to enjoy music by the elementary band.

Area students earn Scholastic Art Awards
The Oregon Scholastic Art Awards, a subset of the national Scholastic Art and Writing Awards, provides students between grades 7 and 12 an opportunity to showcase their creative skill. Student pieces are submitted through their art teacher and judged anonymously by a jury of experienced and educated leaders in the visual arts. The pieces are evaluated on the basis of originality, technical skill and emergence of a personal vision or voice. 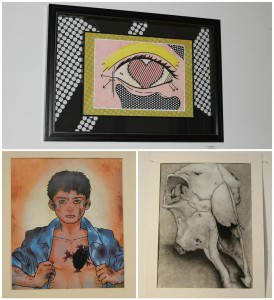 Fritz to run for third term
Portland City Commissioner Amanda Fritz, who had intended to retire at the end of her second term, kicked off her re-election campaign last month with a signature-gathering event. Fritz reversed her decision after the sudden death of her husband in September of 2014.

As with previous campaigns, Fritz opted to gather signatures of registered voters to get her name on the ballot in lieu of simply paying a filing fee, saying that gathering signatures is “an opportunity to connect with Portlanders and talk about their priorities. The easy way is often not the best way.”

Initially elected to the Portland City Council in 2008, Fritz used Public Campaign Financing. She has always set a cap on the level of campaign contributions she accepts. For the 2016 campaign, she is limiting donations to $500 per person. Commissioner Fritz has never accepted cash contributions from corporations, unions, Political Action Committees (PACs) or any entity that is not an individual human being, and she has said that she never will. She earned nearly 2,500 donations in her 2012 campaign, averaging approximately $40 per donation.

Learn more about this campaign at amanda2016.com. 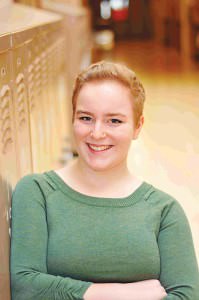 Annika Rose Bell has won recognition for her talents at many levels. A junior at De La Salle North Catholic High School, she lives in Parkrose.
COURTESY PATTI O’MARA

Local girl singing her way to success
Annika Rose Bell, a Parkrose resident who attended Shaver Elementary, Russell Academy and Parkrose Middle schools is now a junior at De La Salle North Catholic High School. Bell, a mezzo-soprano, placed first in the Upper High School Division of the National Association of Teachers of Singing Cascade Chapter Musical Theater Auditions competition. This honor advances her to the Northwest Regional competition. She was cast in a Lakewood Theater Christmas musical production of “The Peppermint Bear: Taming of the Shoe” in December. Last month she placed as a finalist in the Schmidt Vocal Competition, touted as the nation’s premier youth vocal competition.

Bell will attend a summer music program at Oklahoma City University on a partial scholarship. For two weeks in June and July, she will receive classical training at the Vocal Arts Institute there, followed by a three-week musical theater program.

OCU is considered to be a top-tier college program in opera and musical theater and is the alma mater of Broadway greats and Tony Award-winners Kristin Chenoweth, Kelli O’Hara and Lara Teeter, as well as opera legends Leona Mitchell and Sarah Coburn. Bell lists OCU as her first choice for college after high school. We know fingers are crossed throughout her Parkrose neighborhood for an OCU acceptance letter to land in her mailbox sometime next year.

Rose Festival Court finalists selected
Judging for candidates for the 2016 Rose Festival Court has been completed. After a brief introduction and a speech to a panel of community volunteer judges, the following students were chosen to represent Mid-county schools.

Each school will conduct a vote, the results of which will provide 50 percent of the judging results to determine representatives to the court, who will then be eligible for Rose Festival queen. Each member of the court receives a $3,500 scholarship. 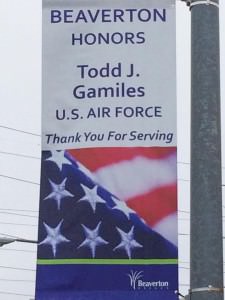 Ventura Park to get upgrades
Among the priorities listed in the 2014 Parks Replacement Bond were playground replacement and restroom upgrades at Ventura Park, Southeast 115th Avenue and Stark Street. Nevue Ngan Associates has received a contract in the amount of $120,000 for design and construction administration for play area improvements and Loo installation.

One focus will be removal of barriers that impede access to the play area from the parking lot and adjacent areas of the park. Another will be replacement of outdated play structures and safety play surfacing. Permanent restroom facilities will be installed in the form of a Portland Loo, a fabricated flush toilet kiosk manufactured here in Portland. Public art installations specifically designed for the neighborhood are also part of the plan.

Vote could bring playground to park
Gateway Discovery Park, Northeast 106th Avenue and Halsey, could receive an inclusive, barrier-free playground funded by the Portland Trail Blazers and Moda Inc. Each has been donating $5 for each assist made by a Blazer this season—1152 so far—to the Moda Assist Program. The playground will be built in the park receiving the most votes at nba.com/blazers/assists. Voting continues through Monday, March 14.