The Mid-county Memo strives to be accurate and thorough in its coverage and corrects significant errors of fact. If you find an error, please call 503-287-8904 or e-mail Department Editor Darlene Vinson at editor@midcountymemo.com. 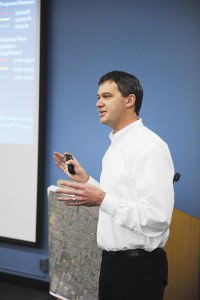 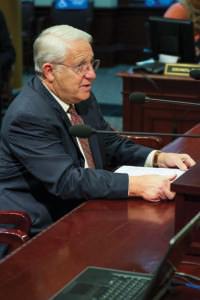 In November 2015, Argay Terrace Neighborhood Association Board Member Bill Lindekugel appears before City Council. He testified that adding traffic to neighborhood streets by opening a longtime dead-end to make it the only access for a new apartment complex is bad for livability.

In the January 2016 article “Castlegate apartments approved,” we got the photo captions wrong, misidentifying Bill Lindekugel and Kurt Krueger. Photos with correct captions are below.

In the February 2016 article “Hats off to Parkrose’s Can Man,” Dave Luce told us we got the number of cans wrong that each large plastic bag holds. There are 400 cans in every bag, not 200.

In addition, in February’s “Powell-Division Bus Rapid Transit crossover decision coming soon” article, the Memo regrets certain errors. First, Dana Lucero’s correct email address is dana.lucero@oregonmetro.gov. Second, we regret having misspelled the last name of TriMet spokesperson David Aulwes. Third, we acknowledge having overstated the decision-making authority of Metro, which has only one of 22 votes represented in the Powell-Division Steering Committee, which apparently has been given final decision-making authority by the City of Portland to determine the Powell-Division Bus Rapid Transit Portland crossover and other routing. For the record, by Lucero’s count, open house attendance was closer to 200, rather than the Memo’s own intentionally generous 60-attendee (exclusive of Metro or TriMet and other staff and organizers) headcount. The Memo notes that the next public meeting regarding the crossover routing remains 4–6:30 p.m. on March 28, 2016, but the agenda has since changed according to Lucero from decision making to information sharing and gathering (including refined transit time estimates and further public input). The meeting will be at Church of Jesus Christ of Latter-Day Saints at 9901 S.E. Caruthers St.

Lucero now urges via email that an option for the city of Portland in the routing of a crossover along 82nd Avenue would involve “relocating” affected businesses. This supposed business-closure alternative is something that was not mentioned in Metro’s own open house documentation depicted in the Memo, which included only a “purchasing” (aka condemning) option potentially affecting as many as 27 businesses. Lucero also points out that condemnation is a last resort and that Metro “adheres to the federal requirements” (eminent domain is enshrined in the US Constitution, which the Memo notes is the law of the land).

The Memo does not dispute that there has been substantial public engagement in the decision-making process but stands by its reporting of two randomly chosen attendee businesses, the directly quoted owners of which happen to be outspoken stakeholders in the routing decision and the potential impacts described and illustrated by TriMet and Metro at the open house on their own homegrown, in situ businesses.

We apologize for the errors.