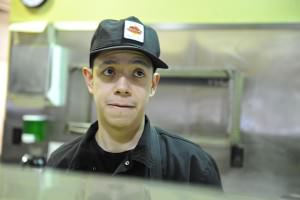 Recently, Executive Chef Jaime Martinez bought Bistro 23 in Parkrose from his former employer after serving as its general manger for five years.
STAFF/2016

Jaime Martinez just might be the smartest restaurateur in Portland. Owner and general manager of Bistro 23 near Airport Way on Northeast 122nd Avenue, Martinez’s eatery is a simple precision-cut gem of a place: It offers down-home fine dining in a casual setting.

His path to ownership began five years ago when he was hired by then-owner Chet Antonsen to be the restaurant’s executive chef and manage the Argay Terrace restaurant. Antonsen saw something special in Martinez and struck a deal with him; Antonsen would hand over the reins after five years to Martinez. “He did really well by me,” said Antonsen, a homebuilder and developer about Martinez. “I am not a restaurateur. Never wanted to be. Never claimed to be.” Antonsen says his plan always was to sell the business. Antonsen and his investment partners dubbed their original business “J2GAL,” recalled Antonsen, chuckling: Just To Get A Lease.

So Antonsen and Martinez executed their five-year plan with near perfection.

Martinez took his autonomy and ran with it: Away from premade soups and salads to homemade soups and scratch salads. Away from day-old merchandiser breads to Grand Central Bakery fresh fare delivered in near-real time to Bistro 23. “One thing at a time … all local meats from a local purveyor,” said Martinez. Menu changes. Better ingredients. Happy hour. An assortment of local wines and craft brews. It was “transformational,” voiced the modest Martinez with pitched pride.

“[Martinez has] such a palate,” said Antonsen, noting that after Martinez took over from him, dinner surpassed lunch as the busiest time of day. “[He] completely changed the place,” said Antonsen; “he’s built a completely different clientele.”

First, what’s with the name? According to Antonsen, the bistro needed a name and the number 23 is the elevation in feet above sea level of Bistro 23’s floor. 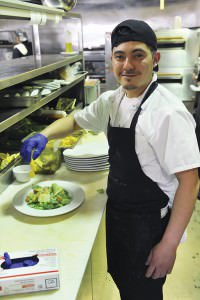 The restaurant resembles a modern longhouse. The light-green building perches unassumingly in the center of Fort Knox Plaza at 5530 N.E. 122nd Ave. But inside is a wide-open space with a dark, quiet room with a fireplace and booths on one end and an illuminated, single-TV-friendly, couch-equipped playroom on the other. In the middle is the kitchen, a salad bar, a drink bar, a checkout counter and traditional bar-style or table seating areas for lunch or dinner. There is also an outdoor seating area. “It’s cozy,” said Martinez.

“Todd and I have been going to the Bistro [23] since it opened its doors,” Bistro 23 regular and Parkrose resident Deanne Paltridge told the Memo in an email, “We’ve tried many of the items on their menu and have not been disappointed with anything. Our favorites, though, are the pork chop dinner, roasted chicken, the Heisenberg sandwich and their homemade soups.” She adds, “We love they have local beers/wines, and their special drinks on the menu are amazing. We have recommended the place to others and when we are there cannot help to share with others coming in for the first time what our favorites are. The employees they have working for them are wonderful …”

Martinez, 33, describes his eatery as a “touch of Italy.” But it does not mean what it sounds like. Some dishes “are from that part of the world,” said Martinez, including pizza, pasta and calzone entrees.

However, “Italian is more philosophy than menu,” explained Martinez. “It is seasonal, fresh, not cutting corners.”

Bistro 23 draws crowds local to the neighborhood, naturally, but also from around the Portland area, including Montavilla. It has modestly rave (4.6 H) reviews on Google.

The Heisenberg, a half or whole baguette sandwich, is a favorite, as is the meatball banh mi, a spicy pork-based Vietnamese sandwich. And of course, everyone loves the hammy, cheesy Pig in the Woods pizza. “Bistro 23’s unique flavors make it my ‘go to’ restaurant whenever I have out-of-town visitors,” praises frequent guest Londa Sundin, also via email. “Their Pig in the Woods pizza is smothered with arugula, goat cheese, ham and mushrooms. Pair that with a cold IPA and I’m in food heaven!”

Martinez has reduced the fat content of his fare by baking and crumbling meats like hamburger or sausage as ingredients of his offerings, instead of cooking the meat on a stovetop. 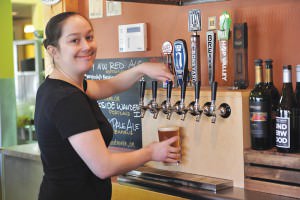 Bartender Roxie Reyes in Bistro 23’s curved-bar area to the right of the broad entrance.
Staff 2016

Martinez has been in the Pacific Northwest for 11 years, having been reared in Chicago and having lived in Texas. He is a chef by training and experience, but he has worked a variety of jobs over the years that required he focus on creativity and economics as well. Explaining how he has managed to master the business side of Bistro 23, Martinez said, “I knew a lot of the numbers … I had to learn how to manage a business from watching others before me and making mistakes, and eventually I started figuring things out and started knowing the ins and outs of the business.”

Fourteen years of Cordon Bleu training, Ruth’s Chris and Bistro 23 chefing and watching and figuring things out seem to have well prepared Martinez for his own fine dining business. If you ask Sundin, it’s working. “I’ve been going to Bistro 23 for years, she said. “I look forward to nice weather when I can sip a cold brew on their outdoor patio.”