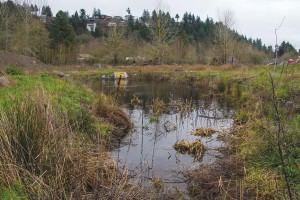 The resident mallard duck pair is hidden from view in this rainy-day shot of Dharma Rain’s Rocky Butte-backdropped pond. Just visible in the ravine behind the pond are stands of native conifers and hardwoods.
STAFF/2016

In the long early shadow of Rocky Butte in Northeast Portland, you can hear the quiet rumble of a peaceful revolution.

The rumble is a diesel-throated, yield sign-yellow Cat clawing earth around a level stretch of former rock quarry and construction landfill.

A Soto Zen Buddhist temple and campus with a residential community is taking shape on a 14-acre parcel of contaminated ground at 8500 N.E. Siskiyou St., also known as Siskiyou Square.

Dharma means good karma, and obtaining a good result by performing a good act is exactly what is befalling Siskiyou Square, one of hundreds of Oregon’s so-called “brownfields”.

It will include a Pacific Northwest-aestheticized but otherwise traditional Zen temple that includes a meditation and event hall called a Sodo a simple-lined modern temple with a traditional-looking roof of brown standing seam metal and a wraparound deck of natural wood that is nearly completed; a workshop; a courtyard with a Japanese garden; dormitories; an office; classrooms; a playground for young and old; a trash/recyling center and open and natural spaces such as a white oak savannah, a community garden and a fruit orchard. Dharma Rain offers meditation practice, classes and workshops to members and non-members alike. 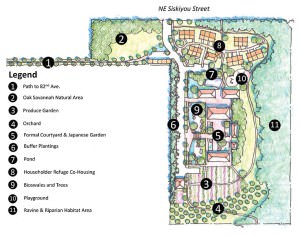 Artist’s rendering of an overhead view of a built-out Dharma Rain Zen Center that is currently under development in Siskiyou Square, the site of the former quarry and landfill near Rocky Butte at 8500 N.E. Siskiyou St. The Sangha, or assembly, has plans to construct 31 residential housing units, from studio apartments to three-bedroom condos, along Northeast Siskiyou Street.
COURTESY DHARMA RAIN

“It was not an obvious choice,” said Director Kakumyo Lowe-Chard, a tall, strong reed with a bald pate and a hearty smile, rolling in on his bicycle. But they knew what they were buying [for 1.75 million] in 2012, said Lowe-Chard. Although Dharma Rain buildings originally were going to be built to Living Building Challenge certification, and although the mostly volunteer builders designed and built to many of the Challenge’s design principles, Dharma Rain will not seek such certification. “It was quite a process [including] 15 months of due diligence,” said Lowe-Chard. Disappointed by the lack of realistic choices sufficiently close in to be accessible and meeting all the goals in a single space, that had a rural feel was “divisive” for Dharma Rain’s board until they arrived at Siskiyou Square.

“I knew right away what we had found,” said Lowe-Chard with an easy laugh. Permitting was a long process: Lowe-Chard says it took Portland Bureau of Transportation two years to grant a permit to Dharma Rain for the seemingly slight required improvements (sidewalks and repaving) along approximately five blocks of Siskiyou Street between Northeast 82nd Avenue and Fremont Drive. The delays cost more frustration than anything, but there was a noticeable loss of the sync needed for everything to come together.

Lowe-Chard sings the praises of Bureau of Environmental Services as Dharma Rain’s best supporter. “Every facet of that bureau has been helpful,” said Lowe-Chard. He credits grants or tax exemptions from the Environmental Protection Agency, Portland, Metro, East Multnomah Soil and Water Conservation District, Business Oregon (Enterprise Zone) and, of course, its own tax-exempt status as a religious organization for its success in opening Dharma Rain only three years after it closed on the land purchase.

Healing the land was the first order of business, according to Lowe-Chard. Assistance by way of one or more EPA and BES and other grants didn’t hurt. Neither did expert advice from a resident mycology expert. The environmental efforts included mitigation and monitoring of currently trace levels of methane that results from anaerobic decay of landfill materials. It includes improving the thickness of the soil’s top cap by soil importation and top-layering. It also includes densification of intermediate soil by the use of 12,000 cubic yards of soil imported and stacked high into itinerate mesas that are moved from place to place as needed for the next building effort. This squashing or densification process is referred to as supercharging. It also includes stormwater management by way of mushroom plantings and the use of the white rot fungi’s root-like mycelia to filter metals and bacteria from leaching groundwater. Finally, it includes eradication of a broad variety of indigenous invasive species, including Himalayan blackberry, teasel, Scotch broom, clematis, English ivy and Japanese knotweed. 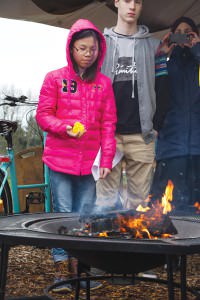 On this particular Sunday at Dharma Rain, children participated in an outdoor Kanzeon Ceremony of chanting and burning original drawings of deceased loved ones in a fire pit. Dharma Rain’s website says it is dedicated to helping people cultivate and realize Zen Buddhism in everyday American lives.
STAFF/2016

Native species including white oak, crabapples and Oregon ash were planted in visible places, such as walking corridors and gathering areas. The L-shaped ravine area skirted on one side by a handsomely hewn rail and post wooden fence and tree-lined sidewalk aside Siskiyou Street includes a mix of conifers and hardwoods. Fungi introduced primarily to filter the groundwater may eventually produce edible mushrooms. To ensure pollination and vitality of the newly introduced plant species, hives of honey bees and Monarch butterflies were brought in. In a couple of months, Dharma Rain will become host to the humming tune of three hives and perhaps as many as 100,000 honey bees.

Creating and maintaining a natural wildlife refuge for indigenous animals meant that construction was done in a way that skittish coyotes, rabbits and birds would continue to feel welcome. Suburbanized, once-wild coyotes and other foragers now have a natural future mixed-terrain and -cover areas of nearly six acres a good fifty yards from the nearest Dharma Rain building. In addition, temple grounds are uniquely positioned as a critical foraging link between two large habitat islands: One includes The Grotto, Rocky Butte and the Gateway Green; the other includes Glenhaven Park, Madison High School and Rose City Golf. Native birds similarly drawn to and sheltered by mature grassland and young treestand include white-tailed kites and killdeer.

The lofted, skylighted yellow meditation hall next to the kitchen within the Sodo is somehow both spacious and intimate; its striking recycled wood-planked floors shine bright from the shoeless stockinged feet of respectful visitors.

One of the more interesting karmic promises made by Dharma Rain is opening its living campus to Portland State University, Portland Community College, Madison High School and neighboring elementary schools. This is where community involvement happens for everyone’s benefit.

Neighborhood input was solicited and individual, and business neighbors were listened to before the land purchase was completed. The presentations and calls-to-order included focus groups, neighborhood associations and Madison High School attendees. Most were excited to have an alternative to a big box store like Walmart and thought a peaceful, natural, quiet Zen Buddhist center was a much better idea. Madison South Neighborhood Association Vice-Chair Dave Smith has nothing but praise for his new neighbor. From the start the Dharma Rain folks have been “great neighbors … very inclusive,” said Smith, “Dharma Rain has been a great addition … an asset to the neighborhood.” Smith knows of no negative interactions with anyone associated with the temple. Smith also has high praise for their synergistic relationship with Madison High School, and concludes that they are “a very good fit, [for the neighborhood].” 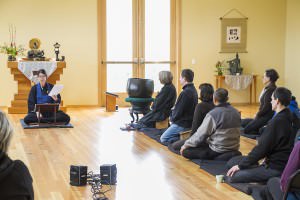 Sue House, a science teacher at Madison High School, explained the school’s partnership with Dharma Rain. She referred to Dharma Rain as an “outdoor laboratory. They have been amazing … they have written grants … they are very open to us,” said House. Some of House’s students come back from Dharma Rain after monitoring water quality, planting vegetables and performing environmental science-related studies with earned credits, others students simply volunteer their time. But the students all have one thing in common: After spending time at Dharma Rain, Madison’s students come back “different,” noted House, “They clearly want to be a good neighbor.”

Yet another Zen occurrence: Walmart, which had spent years trying to convince the powers that be it should open a megastore on this Siskiyou Square site, spent a lot of effort collecting data about the earth and geology and ecology issues. In the end, when Dharma Rain purchased the land, Walmart shared much useful data it had collected.

Most Wednesdays are light manual labor work days for Dharma Rain volunteers. Lotus Blooming, Dharma Rain’s capital campaign, is looking for benefactors to meet its private donation, public grant and in-kind donations and loan goals. It exceeded its goal of raising $500,000 in its Matching Gift Challenge for Phase 1 by last year’s end, the over-the-top $1.173 million dollar result of which will allow the Zen center to complete Sodo construction, workshop construction and trash/recycling enclosure construction and also to pay down some of its debt incurred in the purchase of Siskiyou Square.

Next construction outings include dormitories (for temple monks, residents and “retreatants”), the Dharma school (featuring Montessori-based, non-denominational but strongly mindfulness-oriented schooling for ages 3–18) and the Hondo (housing a bigger event area). Most labor will be non-traditional and will include board members, members and volunteers, including the occasional horde of Madison students on bio/eco science field trips or long-term data-gathering and botany or soil or conservation research projects with mutual benefits: to grow scientific knowledge and to heal the earth.

Completed work includes a nearly finished Sodo, a community vegetable garden, an orchard, a daycare playground, a  few temporary buildings, hundreds of young trees and a shape-shifting pattern of old earth that is on the mend, an asphalt main road, ready-to-pour concrete and gravel walkways, itinerate soil mesas, mature treestands and the wooden fence along Siskiyou Street.

May 2016 is the targeted completion of the Sodo; this work-in-progress will be opened to the public. For more information, visit dharma-rain.org, or contact Kakumyo Lowe-Chard at 503-341-6675. “I really wanted Dharma Rain’s development of this site to be a teaching in and of itself,”  Lowe-Chard said in an email. “So we’re demonstrating inter-dependence, compassion and wisdom in how this is planned, created, and maintained.”