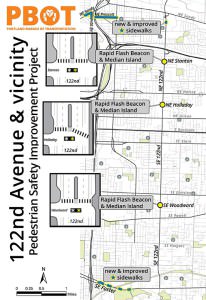 Winston Sandino, Portland Bureau of Transportation’s project manager, and Dylan Rivera, PBOT’s public information officer, sat down for a teleconference recently to update the status of the 122nd Avenue Pedestrian Safety Improvement Project (“Safety improvements, repairs along 122nd Avenue” MCM July 2015). The project is a part of Portland’s Vision Zero, the philosophy that all fatal and serious injury crashes are preventable with a combination of engineering, education, public engagement and other efforts.

The project is funded with $7.3 million and focuses on school access and improved transit along TriMet Line 71, which runs between Southeast Foster Road to the intersection of Northeast Prescott Street and Sandy Boulevard. $3.3 million is allocated to repaving, and the remaining $4 million is allocated to sidewalk gap infill, Americans with Disabilities Act-compliant curb ramps and the addition of three rapid-flash beacon lights and median islands at crosswalks along 122nd Avenue.

The sidewalk gap infills and/or repairs (e.g. relocating utility poles and/or fire hydrants) are sited along various Southeast Foster stretches around Southeast 112th Avenue that have high-density business development going on and high transit and access demands but presently have no sidewalks or have very shallow and/or obstructed sidewalks (insufficient setback of utility poles and/or fire hydrants from the curb) along Northeast 122nd, between the Chevron gas station and the Kmart across from Northeast Prescott Street and along a zigzag path along Northeast Prescott, Northeast 92nd Avenue and Northeast Sandy Boulevard.

The cross-streets to which the beacons and medians are sited include Northeast Stanton, Holladay and Southeast Woodward streets. On the north side of each intersection, curb extensions are provided to reduce the pedestrian crosswalk pathway; the curb extensions are shallow enough, however, to facilitate unimpeded bicycle pathways and street parking. According to PBOT, Northeast Holladay Street was chosen over Northeast Multnomah Street because the former is a bicycle- and pedestrian-friendly “greenway.” Northeast Woodward Street was chosen because of a nearby high-density apartment build-out; Northeast Stanton Street was chosen—despite there already being a second crossing one block south at Northeast Russell Street nearly completed and awaiting activation—to provide ample safe crossings of Northeast 122nd Avenue for Russell Academy and Portland Christian School students.

As Rivera pointed out in an email, “installing rapid-flash beacons is a proven way to reduce crashes, and using them on a High Crash Corridor, such as 122nd Avenue, is a good way to target them where they are needed most.”

Sandino pointed out that infilling sidewalks requires engineering and that sidewalks are more than hastily poured concrete slabs. Before concrete is poured, underground utilities and stormwater must be managed. Obviously, underground utilities must be avoided or moved before sidewalks are installed. And stormwater must be diverted and carried away to avoid flooding. This is because a four-inch concrete slab abutting a seven-inch concrete curb redefines the path stormwater takes, redirecting the flow from formerly gravel or dirt beds (where, depending on the water table and the flow rate, the water is absorbed to some extent) to possible street or even sidewalk flooding if the stormwater is not diverted from the curb (typically down through a drain grating), treated and contained or expelled over time. This diverting, treating and containing or expelling infrastructure must be in place before any forms are erected and concrete is poured.

In addition, to improve access and better accommodate blind or visually impaired pedestrians, an audible indicator is being added to the demand pushbutton of the existing signal-controlled and marked crosswalk at the intersection of Northeast Sandy Boulevard and Prescott Street, according to PBOT.

For more information, contact Sandino at winston.sandino@portlandoregon.gov or call him at 503-823-5767.