Local businesses provide employment for area residents and products and services close to home. Business Memos celebrate news, advancements, promotions, retirements, expansions and other noteworthy events at these cornerstones of our community. To share news of your business with our readers, submissions for the March issue are due by Monday, Feb.15. For best results, e-mail editor@midcountymemo.com. You may also mail submissions to 3510 N.E. 134th Ave., Portland, OR 97230, or call 503-287-8904.

Bradford’s Sports Lounge, 10346 N.E. Halsey St., the Gateway hang-out known for hearty breakfasts, handcrafted burgers and a wide selection of microbrews, is making a name for itself with its Sunday evening music lineup. Local blues legend Ed Neumann invites his friends to join him on stage from 8 to 11 p.m. each week. He is frequently joined by world-class acts passing through town on tour.

Neumann and Bradford’s are working together to offer some special celebrations this month.

First up is a Super Bowl and Mardi Gras party Feb. 7. Bradford’s will dish up authentic gumbo and jambalaya beginning at half time of the big game. Service lasts until the last morsel is gone. Neumann and the Big Easy Band take the stage after the game to serve up authentic New Orleans sounds.

Valentine Sunday is a dinner and dance party with a special surf-and-turf menu for two that includes champagne. A swinging rock revue featuring Neumann and the Chameleons begins at 7 p.m.

The remaining Sundays will see a return of the Jim Mesi Band Feb. 21 and guitarist Ben Rice Feb. 28. Both shows begin at 8 p.m.

There is no cover charge for any of these performances. 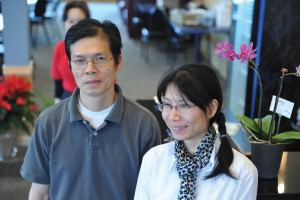 In December, Good World Chinese Restaurant & Lounge opened for business at its new location in Parkrose. After losing their lease, husband and wife owner-operators Gou (Kevin) Fen Xu and Wan Hong Su leased the former Harry’s Fresh Deli space in the Parkrose Plaza. Opened in January 2008, the restaurant built a large customer base in the former bank building next to the hardware store in the heart of Parkrose’s business district. While Chef Kevin Xu runs the kitchen, Wan Su, who runs the front of the restaurant, said it was important to stay close to their Parkrose customers. “We wanted to find someplace close for the customers,” said Su. “They are very important to us; we love our customers.” Longtime customer Craig Tolonen mirrors the affection. “We love Good World. We’ve been going there since they opened,” the Argay Terrace resident said. “They have great food. We go there a couple of times a month; they’re even closer now.” Tolonen said that he and his wife have not only visited Good World’s new location but recently took friends visiting from Norway and Seattle there. “Our friends loved it, too,” he said.

Su said they expected to spend the thousands it took to refit the building and buy new fixtures and equipment; what they didn’t expect was the extra time it took to reopen. Su said they planned an October opening, but unforeseen delays set them back until the middle of December. “It took longer than we thought, but it had to be right,” she said. “We’re happy it’s over.” Open daily at 11 a.m., the Cantonese-and-Mandarin-style restaurant at 5055 N.E. 122nd Ave. features dim sum and a separate lounge with full bar and all Oregon Lottery products. Despite a smaller capacity of 130 people, Su, who is recovering from a broken arm, said they’re ready to serve, even one-handed. “We look forward to seeing all our old customers here.” 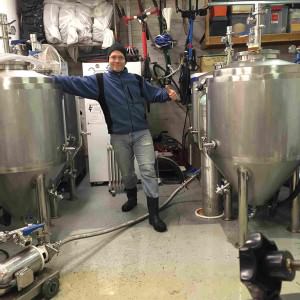 A former brewer of 15 years at Widmer Brewing, Sheley met his wife Karen, a production supply worker at Widmer, in 2004.

Sheley has competed for many seasons in the Oregon Bicycle Racing Association-sponsored Cross Crusade Series race. He competes not for ribbons, but for sweat and pride.

The Sheleys’ daughter, Malina, 8, used to “ride cargo” home from daycare, where her mom dropped her in the morning. Sheley ran Malina home in his Bullitt bicycle equipped with a BionX electric pedal-assist and a precious-cargo-worthy forward hold, Malina turning to talk to her dad between full-face gulps of a wet Portland headwind.

After leaving Widmer Brewing in 2011, Joel founded Spoketown Cargo, a bicycle-ridden delivery service that featured his cargo bicycle and his pedaling stamina.

Then came Gateway Brewing in their Hazelwood home in Northeast Portland.

Year-old Gateway Brewing is believed to be the first Alcohol and Tobacco Tax and Trade Bureau regulated micro- or nanobrewery east of 82nd Avenue in Portland.

According to Sheley, the trick to managing brewing on a small scale is the labor-intensive, hands-on effort to keep all the nanobrewing balls in the air, to say nothing of a busy home life with a wife employed full time and a daughter in elementary school and after-school care.

Still TTB-approved, but now a two-barrel instead of a half-barrel operation, Gateway Brewing is the only nanobrewery in the Gateway neighborhood, running four fermenting brews at once.

What’s the most fun part of craft brewing, according to Sheley? A trifecta of when what’s in his head, what’s in his recipe and what’s in his product are one and the same: perfect nose and palate.

For more information, visit Sheley’s website, www.gatewaybrewingpdx.com, or call him at 503-975-9103.