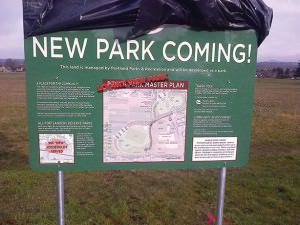 Did the city outsmart east Portland residents renaming Beech and Gateway parks with little to no public involvement?
STAFF/2014

Last month, Portland Parks & Recreation (PP&R) employees twisted the arms of the Gateway and Argay Terrace neighborhoods … and it hurt. By using a loophole to rename Gateway and Beech parks, they outsmarted east Portlanders, virtually taking their voice out of the process.

According to Portland Parks & Recreation’s own public document titled “Policy Name: Naming of Parks, Natural Areas, Recreational Facilities, and Regional Trails,” renaming a park must meet a higher threshold and thus is a more difficult task and invokes a different process. The policy discourages renaming “subject to a critical review that includes consideration of the original justification for the current name, the value of prior contributors, and the rationale for changing the name.”

Renaming is further subject to “all other steps in the Naming process.” Therefore, renaming is discouraged, but in the end, the process is just like naming—but more rigorous and thus more difficult.

Not only are they offensive, PP&R’s recent actions are also probably illegal. Despite being a statutory department within the municipal government, which is the city of Portland, PP&R apparently thinks it is immune from Oregon’s public meetings law. Moreover, since the parks’ so-called “naming” process failed to follow PP&R’s own naming policy, now PP&R is retroactively covering its tracks by changing its own rules to agree with the ad hoc process it used in the renaming process. 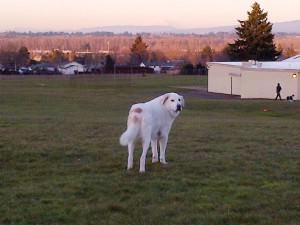 This latest bungled process from the city makes citizens wonder if bureaucrats actual process is to sit around their offices, hold meetings with each other, which, apparently leads them to think they’ve done everything, and then tell citizens who question them “Yes, we have a process,” never analyzing whether it works or not.

Did the city properly communicate with neighbors? Furthermore, what does PP&R consider public outreach?

The city never sent the Memo an email or reached out by phone to notify the paper of any process; considering that the naming of a park to be a big issue, why didn’t they?

The meetings were unannounced to members of the public, and at least the Beech Park-relevant Argay Terrace Neighborhood Association (ATNA) committee member admittedly failed to inform the entire ATNA Board that he was involved in a secret Beech Park renaming process.

Bad process equals good outcome?
First, PP&R Public Information Officer Mark Ross insists that Gateway Park and Beech Park were not real names. “The endeavors with Beech and Gateway are not renaming endeavors; rather, they comprise the actual, formal, park naming process. The names “Beech Park” and “Gateway Park & Urban Plaza” are simply names we are using for the time being to identify the parks,” Ross wrote in an email. 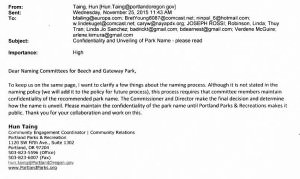 The time being 40 odd years, in the case of Beech Park, according to Joe Rossi, of Rossi Farms, who recalls seeing “conceptual drawings” of Beech Park on display in the hallway when he was a student at Shaver Elementary School in the 1970s.

In addition, PP&R’s naming process requires an ad hoc review committee appointed by PP&R’s director to consider naming suggestions “based on the criteria outlined below and with consideration of public comment.” The assistant parks director will assign a staff person to assemble and support the advisory committee. Then “the relevant Neighborhood Association(s) and community-based organizations will be advised and their comments on the [name] proposal will be invited.”

In this case, PP&R Community Engagement Coordinator Hun Taing was appointed to designate committee members (see below) and chair the meetings. However, since only cursory public comment for name suggestions was ever solicited at a few meetings, unless the designees somehow represent the public, the public at large was ignored and avoided.

Because of this tainted, semi-secret naming process, the public—the group perhaps most directly affected by the renaming process—were flatly excluded.

Indeed, Taing warned her naming committee members not to talk about the recommended renaming of the two parks. She followed that up days later with a private email to the committee members reminding them they were to keep the recommended names “confidential.” She also wrote that PP&R’s entire naming process would be amended to reflect this new secrecy stance, effectively to retroactively codify her own impromptu star-chamber proceeding. Does Taing not understand the public process, or was she instructed to downplay the renaming/naming process fearing the public’s reaction to news of the renaming?

ATNA’s representative on the parks naming committee finally revealed the entire naming process to board members at their December meeting. The next day, neighborhood chair Doug Cook sent an email to Commissioner Fritz and PP&R Director Mike Abbaté asking them to reopen the process as the neighborhood association’s board was unaware of it, despite one of its members serving on the naming committee. “I regret that the ATNA did not feel included in the process for naming the park,” PP&R Director Mike Abbaté said in his email reply to Cook. “That was certainly not our intention. We wish we could have identified this disconnect sooner as we were under the impression that the neighborhood association was very engaged in both the design and naming processes.”

The shrouding of the decision-making process in mystery and behind closed doors caused confusion, frustration and delay. The Beech Park renaming committee recently punted two recommendations—Luuwit View Park (“Fire breather” in the Klickitat language) and Garre Farm Park eschewing a third—to final deciders Abbaté and Commissioner Amanda Fritz, admitting to no naming consensus for Beech Park, which means it isn’t official, but the secret recommendation process is over.