Local businesses provide employment for area residents and products and services close to home. Mid-county Memo Business Memos celebrate news, advancements, promotions, retirements, expansions and other noteworthy events at these cornerstones of our community. To share news of your business with our readers, Business Memo submissions for the January issue are due by Tuesday, Dec. 15. For best results, e-mail Darlene Vinson at editor@midcountymemo.com. You may also mail submissions to 3510 N.E. 134th Ave., Portland, OR 97230. To leave a phone message, dial 503-287-8904. The Mid-county Memo fax number is 503-249-7672. 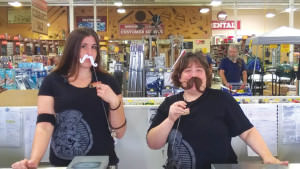 Last month, everybody got in the ’stache act for the inaugural Movember event held at Parkrose Hardware.
COURTESY PARKROSE HARDWARE

All November, PH store employees wore fake mustaches, supportive t-shits, and even held a 25 percent off “Sack Up and Save Sale,” with proceeds donated to the Movember Foundation. In addition, employees handed out men’s health literature in support of Movember, peanuts, and just had a silly time of it, according to PH project director Angel Menchaca McKrola.

Parkrose’s most famous business brought in barber chairs for the Nov. 1 shave event. Worldwide, and in Parkrose Hardware, men got a clean shave and then grew a moustache for the next 30 days, raising money through pledges. In addition, participants were entered in a raffle to win a drill; Ken Lee was PH’s Portland location winner, and Lyle Dutton won in Vancouver. 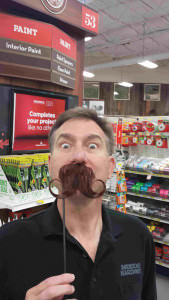 The Sack Up and Save Sale occurred mid-November and raised $1,265 for the Movember Foundation. People bought a Parkrose Hardware “We Know Nuts” bag and got 25 percent off anything that fit in the bag. Since so many people wanted just the bag, according to Menchaca McKrola, many donations were garnered just for it.

Furthermore, Movember participants are entered in a before-and-after contest judged by PH staff for the chance to win a $250 shopping spree at the store.

Overall, Menchaca McKrola said they were pleased with how the inaugural project went. “We plan on having this event annually and anticipate that now that we’ve done it once, it will grow and we’ll be able to make an even bigger impact, spreading the word about men’s health issues,” she said.

More information on the promotion is at parkrosehardware.com/movember-shave-date-2015.

In other Parkrose Hardware news, the new Vancouver store, 8000 E. Mill Plain Blvd., opened last month. Menchaca McKrola said they’re putting the finishing touches on everything, but they are excited to see customers coming in to explore. “We’ll have a big grand opening next year in March,” she said. “However, we’re ready to serve the west Vancouver market today.”

In 2003, two Australian “mates” just trying to bring back the moustache started Movember; it had 30 participants the first year. According to its website, Movember got serious in 2004, registering as a foundation and raising more than $40,000. Since then, this lighthearted way to raise money for men’s health issues has grown to include more than 4.5 million men and women from 21 countries participating annually. Movember has raised more than $650 million, funding 832 men’s health projects. Money raised goes for prostate cancer, testicular cancer, mental health programs and physical inactivity research.

After running a successful practice in Vancouver for more than 15 years, Dr. Thomas Taylor of Soft Touch Chiropractic has decided to relocate his practice to his home in Parkrose. A 20-plus-year resident of the Argay Terrace neighborhood, Taylor has grown weary of the commute. He describes his mornings as a 10-to-15-minute trip, but the drive back home in traffic now takes 30 to 45 minutes.

As he approaches retirement, Taylor is scaling down hours and taking advantage of his spacious home to set up waiting and treatment rooms downstairs and a massage therapy room upstairs. 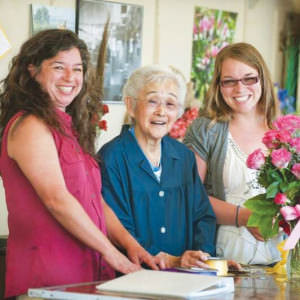 The classic contoured Coca Cola bottle was introduced in 1915. That same year, Japanese immigrant Sukemon Itami opened Kern Park Floral at 6713 S.E. Holgate Blvd. Today the shop is called Kern Park Flower Shoppe and is operated by Itami’s great-granddaughter Holly Itami Springfels and her daughter Kimberly Dee Walker. They are often joined by Holly’s grandmother, Fumi Itami. She is the daughter-in-law of the founder.

While the Itami family has owned and operated the flower shop throughout its long history, there have been challenges. During World War II, they were incarcerated in the Minidoka Relocation Center in Idaho. After the war, they returned to find the shop and attached family residence all but destroyed by vandals. Springfels says they considered themselves lucky because they were able to rebuild and reopen the shop.

A few years later, in 1957, the building was destroyed by a boiler fire. Once again the family rebuilt, this time with help from the community.

Like her cousins and siblings, Springfels recalls growing up in the shop. She remembers the shop being constantly busy and was thrilled when she was old enough to ride along on deliveries as a shagger (the one who delivered the arrangements to the door of the recipient).

Kimberly, like her mom, also worked in the shop as a youngster. Her experience landed her jobs at other shops that helped her pay her way through her education at the University of Oregon. These jobs exposed her to new designs, techniques and mechanics, which allows Kern Park Flower Shoppe to offer traditional arrangements alongside newer, more modern pieces. 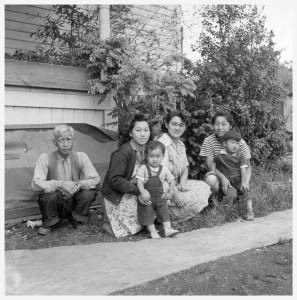 A centennial celebration is Saturday, Dec. 5, from 2 to 5 p.m. Springfels, who now lives in the Hazelwood neighborhood, looks forward to seeing Mid-county friends and neighbors at this 100-year anniversary party. Light refreshments will be served, and holiday arrangements will be on display.

You may also visit Kern Park Flower Shoppe online at kernparkportlandflowers.com or call 503-771-9000 to order holiday centerpieces and arrangements.

Montavilla Food Co-op wants to change the way people relate to their local grocery store. To that end, a group of dedicated volunteers are working “to connect the east Portland community to healthy food, support local farmers and producers, build community wealth and advance sustainability initiatives all within a centrally located cooperative grocery.”

The backbone of any co-op is its member-owners. MFC 500, the campaign to recruit approximately 60 new members to reach its goal of 500 total members by the end of the year, is underway. If this goal is met, the co-op will draw the name of one lucky member to receive a wellness package valued at more than $100.

To learn more and to become a member, go to montavilla.coop.