Local businesses provide employment for area residents and products and services close to home. Mid-county Memo Business Memos celebrate news, advancements, promotions, retirements, expansions and other noteworthy events at these cornerstones of our community. To share news of your business with our readers, Business Memo submissions for the December issue are due by Sunday, Nov.15. For best results, e-mail Darlene Vinson at editor@midcountymemo.com. You may also mail submissions to 3510 N.E. 134th Ave., Portland, OR 97230. To leave a phone message, call 503-287-8904. The Mid-county Memo fax number is 503-249-7672. 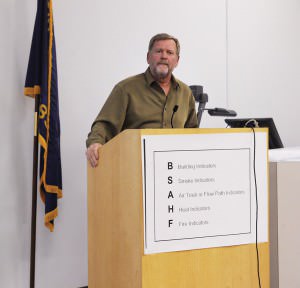 Local developer Chet Antonsen donated six building lots to the homeownership nonprofit Habitat for Humanity Portland/Metro East. Four parcels, valued at $50,000 each, are in the Argay Terrace neighborhood at its eastern edge on Northeast 148th and 147th avenues near Sandy Boulevard.
STAFF/2015

Last month, local developer Chet Antonsen of MonteVista Homes donated six parcels of land to Habitat for Humanity. Valued at $50,000 each, the parcels “might need a little improving, but not much” before they’re buildable, said Antonsen.

In addition, when he learned the Argay Terrace Neighborhood needed a space to store its records and yard signs, Antonsen donated storage space to the group at his Fort Knox Mini-Storage facility in east Portland.

Two lots are in Gresham at Southeast 204th and Stark Street; the others on Northeast 147th and 148th Avenues near Sandy Boulevard at the eastern edge of Argay Terrace.

According to Habitat for Humanity Portland/Metro East (Habitat) CEO and President Steve Messinetti, the lots are in good locations. “There really is no bad location,” Messinetti said in a phone interview. “Chet’s been a supporter of Habitat for many decades; this is a huge donation this will enable us to house more families though our home ownership program.”

The Gresham lots are adjacent to eight homes Habitat previously built on property they bought from Antonsen at a discount during the recession.

Messinetti said 25 years ago, in Habitat’s early days, they built most of their homes on donated lots. “We built all our homes on donated lots. That changed a long time ago. Very rarely do we get property donated [these days].” He added, “At a time where we’re seeing land prices escalate to the point where it’s hard to imagine what we’re going to do, a property donation like this is a big deal.”

Messinetti said it’s too early to say when the Argay Terrace homes will start construction. Plans for 30 homes in 2016 are set, but Messinetti said it could be 2017 before work gets underway in Argay.

Since 1981, Habitat has built more than 300 homes in the Portland area. Habitat homes are built with a volunteer labor force, utilizing building materials and services donated by local business, as well as individual and corporate donations.

According to its website, habitatportlandmetro.org, Habitat says it doesn’t build homes for people, but with them as equal partners.

Homeowners invest at least 500 hours of time and effort building their own home. With a zero percent-interest mortgage, the homes are then sold to them at no profit. The home’s purchase price is based on the cost or value of the materials, with nothing added for volunteer labor. Currently, local homes cost around $150,000 to build.

Habitat serves low-income families earning 35 to 60 percent of the area’s median family income or approximately $25,865–$44,340 for a family of four. Habitat is the only program in the Portland area that offers homeownership opportunities to families in the 35th-percentile bracket, according to its website. 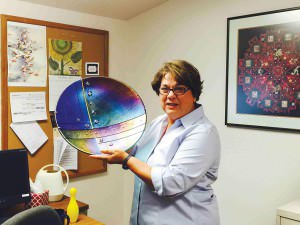 Judy Alley, SnowCap executive director, displays the 2015 Food Hero Innovation Award presented to her by the Oregon Food Bank last month. Alley described the bowl as “a beautiful thing” that to her signifies not only feeding the hungry but also the importance of bringing people together around a meal.
COURTESY SNOWCAP

Snowcap Executive Director Judy Alley was named a 2015 Food Hero at the annual Oregon Harvest Dinner in support of the Oregon Food Bank held last month. She was given the Innovation Award in recognition of her creative, out-of-the-box, effective solutions to help people in need fight hunger.

Myrna Jensen, Oregon Food Bank media relations, said Alley “was honored due to her client-centered approach to service” and noted that Alley’s innovative thinking has led to expanding the footprint of the SnowCap building to accommodate more food donations and changing service models. Moreover, Alley was recognized for shifting to shopping-style pantry distribution; developing creative partnerships with outside organizations, like with Multnomah County’s County Crops program; and creating a community environment that is supportive of children, women and families by providing supplements to food boxes like the baby shower in a box and Mommy Meals.

Alley was moved by this recognition and said, “I realize it is not just my work; it’s for all of SnowCap and what we do here. It is for the staff and volunteers who try harder day after day. We are all very proud.”

SnowCap is the largest food pantry in the Oregon Food Bank network. It served more than 114,000 people last year.