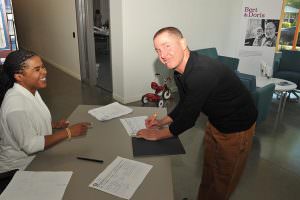 Tensions were high at the July 11 Gateway Affordable Housing meeting. Many of the more than 70 local residents in attendance stood in the back of the crowded room, eager to weigh in.

The point of contention?

A one-acre mixed-use site adjacent to the planned three-acre park on Northeast 106th Avenue and Halsey Street, dubbed Gateway Discovery Park. Residents were concerned over subsidized housing being added to the project at the last minute and without their input.

The initial proposal for the one-acre development, approved by Portland City Council as part of the park’s Master Plan in 2011, called for 26 residential townhouses on the upper floors of the building, with retail, restaurant and parking space on the ground floor. The Master Plan included input from a citizen advisory committee and public comment sessions.

However, when the project was dispositioned by the Portland Development Commission in 2014 and 2015, the new proposals differed from the 2011 plan. The winning bid, from developer Gerding Edlen, calls for 40 residential units, all of them at or below 60 percent of area Median Income (MFI), along with 23,325 square feet of commercial space. MFI for a two-person Portland household is currently $58,640.

Section 8 housing was originally part of the proposal, but it was removed when funding became unavailable.

Gerding Edlen’s development partner, nonprofit Human Solutions, is being brought in to help administrate the building. Human Solutions also plans to move its headquarters to the building, fulfilling an unannounced amount of the requirement for commercial space.

Justin Douglas, policy manager for the PDC, points out that the 2011 Master Plan acknowledges the fact that market conditions may change the makeup of the one-acre development. “It suggested the numbers would be a nice estimate, and nothing more than that,” said Douglas. 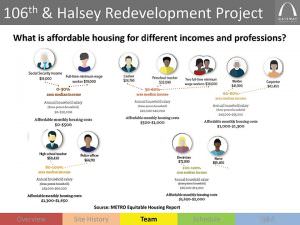 Local residents have a less charitable view of the PDC’s reasoning. They feel a project that they helped map out has been changed without their consent for the benefit of developers. The citizen advisory committee that helped advise many aspects of the project was also disbanded by the PDC, which cites funding cuts from the city as its impetus.

At the meeting, Glenn Vance, a 38-year resident of the neighborhood, gave a brief historical overview of urban renewal in Gateway and its continued failure to yield projects that bring new tax dollars into the community. He explained that instead, construction has been centered disproportionally around low-income services, citing Section 8 and other low-income projects around the neighborhood, along with a new Department of Human Services building in the old Target on Northeast 118th Avenue and Glisan Street.

“It took us twenty-some years to get a park,” Vance said. “Nobody said anything about affordable housing.”

Another community member, Matt Rollins, added that he thinks it is a conflict of interest for Human Solutions to relocate its headquarters to the development.

Gerding Edlen, for its part, said the private market cannot bear unsubsidized housing at this location. Jill Sherman, a partner with the developer, said that a developer looking to build a high-quality dense urban building in Portland would require rent of 120 to 150 percent of the area’s median income. According to her analysis, rents in the private market where the development sits today will only pay around 80 percent of AMI.

The PDC has remarked that its involvement in the project is nearing a close as the Portland Housing Bureau, along with the development team, takes ownership of the project. No additional community meetings have been announced yet.

Construction of Gateway Discovery Park and the mixed-use development will each will take place separately. According to a timeline distributed by the PHB, neighborhood meetings for the mixed-use development will take place in November 2016 and March/April 2017. Construction begins in November 2017. For more information about the project, or to learn when the next meeting is, call PHB’s Michelle DePass at 503-823-3606 or by email at Michelle.DePass@portlandoregon.gov.

Housing is considered affordable when housing costs—rent plus utilities—are no more than 30 percent of gross incomes. Affordable housing is also considered as such when it’s economical to those with a median household income (MFI) rated by, in this case, Metro.