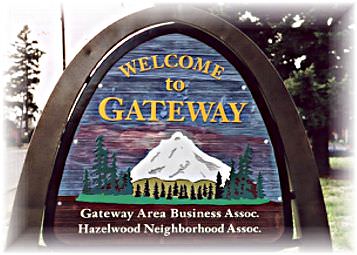 the board for three years, and was president for one. He originally declined the head position, he says, but consented to be vice-president and was then ascended to the top post when the president “mysteriously disappeared,” he says.

“I’m sorry to see him leave,” Gateway president Bruce Altizer told the Memo. “He has been the voice and the face of the organization for a long time. He’s done a lot for what we were able to pay him. He’s certainly worthy of recognition.”

“He was the glue that held us together,” another longtime member, Paul Butterfield, says. “He’ll be hard to replace.”

Former East Portland District Coalition and Hazelwood president Kay Collier calls Hoefling “the best. He’s always been interested in community issues over the years, and he’s very dedicated. You couldn’t ask for a better volunteer.” She recalls that during a Neighborhoods USA convention in 1998, when she organized a dinner and tour of Gateway and Hazelwood for visiting neighborhood activists, Hoefling secured donations of food. “We had a wonderful dinner, and it didn’t cost us anything,” she says.

Born in Wisconsin, Hoefling moved with his family to Portland in 1943. He attended Lewis and Clark College, and later worked for 29 years as a ski instructor. When his family later moved on to California, he says, “I couldn’t move Mount Hood to California, so I decided to stay here.”