Rossi Farms gets Taste of Parkrose 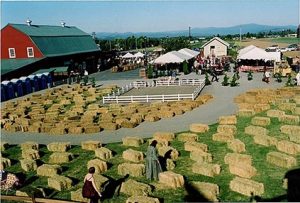 Set for Saturday, June 24, the Taste of Parkrose moves from Sandy Boulevard to Rossi Farms. In its fourth year, the community event is produced by the Portland Development Commission’s Historic Parkrose group.
STAFF/2017

The Taste of Parkrose, a free community event, was created by Portland Development Commission’s Historic Parkrose (HP) group in the summer of 2014 to bring people to the business district. HP, one of PDC’s eight mini-urban renewal areas it has created around Portland, is relocating its signature summer event from the business district to Rossi Farms, according to HP Revitalization Manager Mingus Mapps.

Mapps doesn’t take moving the event away from the district core lightly. He said the event just outgrew the space. “It is a big deal to move it off Sandy; part of that is logistically necessary.”

Despite Rossi Farms not being in HP’s defined area, Mapps sees his mission as extending beyond its set boundaries. “We’re an ecosystem that includes the business district and school district, and Rossi Farms is kind of the jewel of the district,” Mapps said. “I don’t think it’s meaningful to pretend Parkrose stops at Wygant [Street].”

Joe Rossi, who is no stranger to planning and holding large events, held a Western themed Barn Bash for years at the family farm. “I’m excited to have the Taste of Parkrose event at Rossi Farms this year,” Rossi said in an email. “I hope to be part of growing the event for our community plus, it takes the pressure off people asking about another Barn Bash. LOL.”

Created to showcase Parkrose restaurants and businesses, for its first two years the Taste was held in the heart of the business district on Northeast 106th Avenue between Sandy Boulevard and Wygant Street. Since this meant closing off a city street for a day, all neighbors had to agree. Mapps, who recently marked his second year as HP’s manager, said most neighbors welcomed it but some were opposed, which was exhausting to navigate. “A handful of people were really, really, really not okay with it,” he said. So, when managers of the hardware store across the street, who had begun EGGfest (see sidebar) in their parking lot in 2015, offered Mapps the parking lots of the yet-to-be-opened Dollar Tree and Grocery Outlet stores, he moved the event there. However, shortly after the event last summer, the two stores opened, making that site untenable.

Mapps said hardware store managers wanted the event moved to Rossi Farms. “For them, Rossi Farms is the perfect spot for it [EGGFest],” he said. “Because they’re part of a huge corporation, they need to double the size of the event every year, and they want a neighborhood tie-in,” Mapps said. “Last year they sold 30 Big Green Eggs (see sidebar); this year they want to sell 60.”

Set for Saturday, June 24 from 9 a.m. to 4 p.m., the (mostly) free event includes a 5K and 10K fun run and walk that begins and ends at Parkrose High School; the Taste Tent, featuring samples from local restaurants and EGGfest chefs; and a Community Pavilion to connect neighbors with community organizations.

New this year: a beer garden and an under-$10 charge to enter the Taste Tent.

All other areas of the fair will be free and open to the public, who are welcome to enjoy vendors, live music and kids’ game areas.

“We’ll give this a try and if it doesn’t work, we’ll try something else,” Mapps said. “[The move] seems like a fairly safe gamble. I’m hoping it’ll be like last year, only better and bigger.”