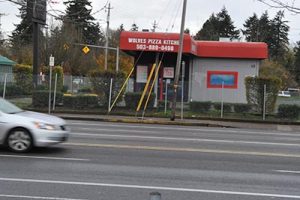 The new facility in the Hazelwood neighborhood received a portion of a $21.5 million-dollar grant awarded to three Portland-area projects. The six benefactors include Oregon Health & Science University, Providence Health & Services, Kaiser Permanente Northwest, Adventist Health, CareOregon and Legacy Health. The combined medical treatment and residence facility is an undertaking that recognizes the multiple problems faced by many homeless people concentrating in east Portland over the last twenty years.

Kathy Pape, CCC’s senior director of public affairs, explained to the Memo that two existing programs will be moved to the new Burnside facility: its Eastside Concern program, currently provided at 1949 S.E. 122nd Ave., and its Recuperative Care program, in Portland’s Old Town.

A westward view down East Burnside Street at 122nd Avenue of the proposed six-story Eastside Health Center between Northeast 120th and 122nd avenues are depicted in this artist’s rendering. The new development provides 176 housing units in the upper four floors and medical, equipment, staff and community areas on the bottom two floors. Underground parking and a solar-paneled roof are under consideration for the integrated medical (physical and mental, e.g. drug and alcohol addiction) services and affordable housing facility slated for completion in late 2018.
GRAPHIC COURTESY Ankrom Moisan Architects

Eastside Concern will continue to provide substance abuse and domestic violence treatment in an outpatient environment. Pape said CCC has not yet decided what will become of its old Southeast location.

Recuperative Care takes people who are homeless (and thus could not otherwise be discharged from a hospital into a residential environment) and supplies primary and case-management services to the discharged patient at the new facility.

Medical facilities for patients and residents include spaces for both physical and mental health evaluations, which include a drug and alcohol addiction treatment center on the first floor of the new facility.

The upper floors will house otherwise homeless people, including not only those simply in need of affordable housing but also those already enrolled in one of these two programs.

Applicants do not have to have a medical problem to apply for affordable housing at the new facility. Conversely, one must be a resident, or a regular outpatient, to receive treatment for health problems. This new facility is neither an emergency room nor urgent care facility; there are no drop-ins.

This integrated and multidimensional model has worked for years in downtown Portland at Old Town Clinic/Old Town Recovery Center.

In a phone interview, CCC Executive Director Ed Blackburn told the Memo that homelessness is better understood as being more than simply a matter of choice, economic disadvantage, or other barriers to maintaining residency. Portland’s high occupancy rate, a lack of statewide rent control and general economic stress and uncertainty are challenges; however, according to Blackburn, poor and modest-income homeless people typically also have mental health problems or physical impairments. Blackburn referred to this homeless population as “medically fragile people.” Reducing homelessness requires a treatment of the whole person—including these underlying health-related issues, says Blackburn.

In addition to a few shift-specific housing staffers, Blackburn estimated the new Eastside Health Center will have 30 full-time professionals and 20–25 support staff involved in the medical care area on the bottom floors of the facility. Community space will also be provided for meetings and third-party care providers, such as adjunct employment referral services.

The new health center is bordered by the Dick Hannah and Ron Tonkin car dealerships to the east; a MAX station, Ventura Park Plaza apartments and Food Mart market to the south; single-family houses to the west; and multi-family dwellings, including the low-income Eastgate Station apartments, a Cricket phone store and a medical and recreational marijuana dispensary—Herbalist Farmer—to the north.

According to Blackburn, the site was chosen because it is in the sweet spot of a “heat-map” developed by CCC that maps needy-population densities of potential clients countywide. Engagement with the Hazelwood Neighborhood Association (HNA) was sought early on, said Blackburn, and many neighbors expressed concerns for their own potentially fragile family members and friends. “Our ‘customers’ include [our] neighbors [who are] part of the fabric,” said Blackburn. And many of the current staff members of the Eastside Concern already live in the Hazelwood neighborhood, added Blackburn. In addition, he said that the David Douglas School District is home to many needy families and kids.

Longtime HNA Chair Arlene Kimura did not respond to questions about either her group’s meetings with CCC, or a statement on the new development.

Most residential and commercial neighbors the Memo contacted did not know about the project, and most of those who knew something was happening did not know exact details. Dentist Michael Naughton, who owns the corner property next to the new facility and the dentists’ office at 9 N.E. 120th Ave., was asked to meet with CCC staff the last week in November. He knows enough about the project that he expressed some concern. He also suggested that CCC was eyeing his property across Northeast 120th Avenue from the development. Naughton attended the public meeting that anticipated the opening of the nearby Hansen Building homeless center. Naughton said a friend of his believes there is another housing project afoot at the TriMet Park & Ride diagonally opposite CCC’s new Eastside Health Center development. The Memo was unable to confirm this by press time, but was able to confirm from an on-line report that the Park & Ride at Southeast 122nd Avenue and Ash Street is considered by TriMet to be “underutilized.”

One of two residential neighbors who answered the door (out of 10 attempts) rents the home between Northeast 119th and 120th avenues. She was unaware of the development half a block away on East Burnside Street, and she had no comment. The other responsive residential neighbor, who requested anonymity, spoke of general concerns about existing nearby Section 8 housing and a recent drive-by shooting at a bus stop near the Food Mart. He knew of the development half a block away on Northeast 122nd Avenue but had no comment.

No one at Dick Hannah VW/Hyundai, which is directly east of the CCC development, would comment. A call to the corporate phone number given to the Memo was not returned by press time.

General Manager Ben Odenborg of Ron Tonkin Used Cars at 203 N.E. 122nd Ave. told the Memo that his dealership is closing in a month and that the closure of this particular Ron Tonkin location is unrelated to the CCC development. The two nearby Ron Tonkin Honda and Toyota dealerships on 122nd Avenue remain open, according to Odenborg.

“We see this unique housing partnership as supportive of both mental and physical health at a time when people are most in need,” said Andrew McCulloch, president of Kaiser Permanente Northwest. “We know that health is more than medical care. And we need to eliminate barriers to health for the most vulnerable members of our community.”

The uniquely shaped and appointed facility was designed by Portland-based architectural firm Ankrom Moisan Architects, Inc. Pape said the innovative designs are still preliminary, including the possibility of underground parking and solar panels on the roof. There is parking and access in the rear of the facility for emergency vehicles, according to Blackburn, and Central City’s Plan B is to use and/or lease nearby parking spaces as needed.

Central City Concern History and Mission (from its website, centralcityconcern.org)
Central City Concern is a 501(c)(3) nonprofit agency serving single adults and families in the Portland metro area who are impacted by homelessness, poverty and addiction. Founded in 1979, the agency has developed a comprehensive continuum of affordable housing options integrated with direct social services including health care, recovery and employment. CCC currently has a staff of more than 600 and an annual operating budget of $47 million, and it serves more than 13,000 individuals annually.

In the early 1970s, Portland’s Old Town/Chinatown neighborhood was populated largely by older men living in shabby, crime-ridden single room occupancy (SRO) buildings. The rent was cheap, the drug of choice was alcohol and Portland’s street inebriate problem was one of the worst in the nation. In 1979, in response to this growing problem, the city of Portland and Multnomah County together created the Burnside Consortium (now known as Central City Concern) to administer a National Institute of Alcoholism and Alcohol Abuse (NIAAA) Public Inebriate grant.

CCC’s initial work involved alcohol recovery treatment as well as affordable housing management and rehabilitation. Early on, it was clear to CCC leaders that safe housing was of paramount importance to those in recovery and to the neighborhood at large. CCC’s work in renovating urban SRO housing became a standard for other nonprofit housing organizations and attracted national attention.

In the 1980s, “recovery” extended to those addicted to crack cocaine and heroin, and CCC adapted its programs. Its portfolio of affordable housing units increased, and it began offering alcohol- and drug-free housing to support those in recovery, as well as their families. To further support clients’ transitions to full self-sufficiency, CCC added employment training and work opportunity programs in the early 1990s.

CCC meets its mission through innovative outcome-based strategies that support personal and community transformation:
• Direct access to housing, which supports lifestyle change
• Integrated health care services that are highly effective in engaging people who are often alienated from mainstream systems
• The development of peer relationships that nurture and support personal transformation and recovery
• Attainment of income through employment or accessing benefits

The success of these four elements results in a transformation of worldview and self-image from a negative to a positive outlook, enabling people to become productive citizens who want to “give something back” to the community.

The utility patent gives Central City the exclusive right throughout the United States to make, use or sell beds with a certain combination of features, including a bug-resistant frame, a wire mesh support expanse across the frame, optional legs and a bug-resistant solid foam mattress. The frame and legs are made of slick powder-coated steel, and the mattress is covered and sealed against bedbug infestation. The bug-resistant beds and similarly constructed end-tables are stackable for space-efficient storage. According to Executive Director Ed Blackburn, Central City manufactures beds under the patent and sells them to shelters and other institutions throughout the country.