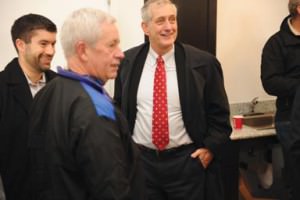 “All of us in this room want Portland to be not just a great city, but a great city that’s affordable for everyone,” Hales said to the more than two dozen people who gathered for the dedication. “That’s a hard goal to achieve; that’s an ambitious goal to achieve, but one that I think we all share.” Hales lauded PHC Northwest does for accomplishing that goal “person by person, and now with this great project.”

Built in 11 months by Home First Development (HFD) for PHC Northwest at a cost of $100,000 per three-bedroom unit, Irish Moss is relatively inexpensive—the 67-unit Glisan Commons that opened last year cost $200,000 per unit—in the low-income and public housing game.

Hales applauded the 63-year-old non-profit and builder for its innovations allowing for a quality design and construction. “We must be able to do that. And then we have to do it again and again and again,” says Hales.

Portland’s Mayor does not want his city to become like San Francisco, where affordable housing is nearly non-existent. “All of us want Portland to be the kind of city where people can afford to live and not be San Francisco,” says Hales. “We’re all sort of mesmerized by the specter of people moving back to the city and pricing them out of everyone’s reach.”

Rob Justus, principal at HFD, said he learned lessons from his partnership with PHC Northwest on Snowberry, their first development together, Justus said amenities built at Irish Moss will be carried into all future designs. “Everything moving forward will have parking, a playground, will have a sports court, free Wi-Fi,” says Justus.

With an occupancy rate from three to seven people per unit, every Irish Moss apartment rents for $895 per month.

Residents’ income must be at least twice the rent, but not over 60 percent of the area’s median income ($38-42 thousand annually). Seven units are already reserved, 18 total approved with four applications in the approval process, according to PHC Northwest Portfolio Manager Barbara Canaday. She expects the development to be fully occupied by mid-January. 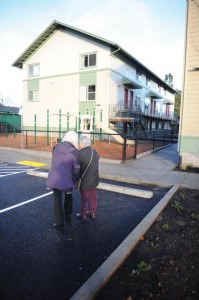 Next-door neighbors Dave and Barbara Luce, who have been living in their home for more than 40 years, are happy to see the development go up. “I’ve had no problems whatsoever,” says Luce. “They’re easy to work with; it’s a helluva improvement.” Luce said he and the developer are going in together to build a new fence between the Luce’s flag-lot and Irish Moss. “They’ve been great neighbors [during the construction project].”
With 14 parking spaces, most of the renters use public transportation. “A lot of folks that would be in the low-income category that would qualify for this, don’t have a vehicle, but take public transportation; hence our location with less parking spaces,” said Canaday. “Transportation is a major issue that we’re trying to help solve as well.”

Currently, PHC Northwest owns eight low-income housing developments. Six they bought, two—Irish Moss and Snowberry on East Burnside at 151st Avenue—were developed for by them by HFD. Except for one in Vancouver and North Portland, the others are all in east Portland, with three more on the way, one at Southeast 171st and Division Street and two more on East Burnside Street, at 143rd and 146th avenues. “We’re concentrating here [east Portland] because this is where the need is greatest for the low-income folks,” says Canaday when asked if there were development plans on Portland’s Westside.

Justus said reaching out to the Parkrose School District to find people who need affordable housing who already live in the district, was something they started with Irish Moss. “This is kind of a first real effort with a school district to do that,” says Justus. “As we move forward, we want to be intentional and work with the eastside community in identifying potential tenants.”

Although he got a late start contacting Parkrose, Justus has already met Centennial’s superintendent and staff regarding his next development at 84-unit project on Southeast 171st Avenue. “We got a late start in talking to Parkrose about Irish Moss, but we’ve already met with Centennial’s superintendent and his staff,” says Justus. “The goal there is to identify lower income families already in the district.”

Justus said school officials he spoke to have never had these kinds of conversations. But when Reynolds School District heard about what Justus was doing, they called him about the two developments he is planning in their district on East Burnside Street. “Before we could reach out to Reynolds, they called us.”

At PHC Northwest headquarters, also in east Portland at 5312 N.E. 148th Ave. Northeast 148th Avenue near Marine Drive, employees manufacture, among other things, LED lights at its plant, the one with all the solar panels, next door on Marine Drive.

A nonprofit company, PHC Northwest was founded in 1951 as Portland Habilitation Center by a group of families who established an organization in Southeast Portland offering educational opportunities for developmentally and cognitively disabled children who were denied public school entrance. It evolved over the years into an organization that not only trains, but also employs more than 700 people with disabilities in diversified businesses like manufacturing, janitorial, landscaping and computer jobs that enable them to earn a living wage for independent living.

Although its role in the community has changed, PHC Northwest’s foundation of increasing independence for people with disabilities remains strong, according to Public Relations Spet Victoria Kearns.

PHCNW is firmly committed to community and environmental stewardship in the form of affordable housing programs, and industrial training to support the manufacturing and production of its LED lights.